Wireless Client Bridge and POE PSE in one brick

We have a telecommuting employee who will be using an 802.3af-compliant IP phone at her desk, but she doesn't sit close to her router. In the past, we gave these types of employees a 802.3af POE injector and had them plug the other end into the LAN port on their laptop, and share the laptop's Wi-Fi connection. This works, but it isn't ideal because (1) the phone only works if the computer is on, and (2) when Windows 10 installs updates it sometimes messes up the connection and we have to reconfigure it.

I would love to use a wireless PSE like Ubiquiti's AirGateway with this injector to provide a reliable Wi-Fi connection and POE to the phone in one brick (they snap together, so it looks like one brick to the end user). I actually have a spare one of these at home that I have configured as a bridge; they're just really reliable. However, none of Ubiquiti's stuff is 802.3af-compliant, so it won't power the phone.

So, has anyone else made a 802.3af-compliant PSE that can be configured as a wireless bridge?

Yes, I could use my usual 802.3af injector and connect it to a range extender that includes an Ethernet port like this one, and that's probably what I'll do if I can't find a single-brick solution. This question is just looking at single-brick solutions for aesthetic reasons: the home users don't want a lot of clutter and extra devices just to get a phone to work. So the best answer here is the one that provides POE and WiFi access to the phone with the least amount of clutter. 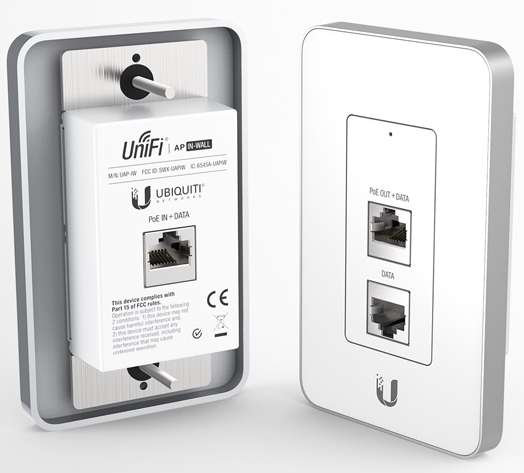 What I like about this solution is that it does exactly what you are looking to do all in one box:

The best part is, it goes into a standard wall or surface mount jack for a nice clean install.

A year later, I wholeheartedly recommend a Powerline (aka Homeplug) adapter with POE, rather than a wireless bridge. I still haven't found any wireless bridges with POE out for less than $100, but in the meantime, the handful of COPS-928-POE have been working great. I definitely recommend this option for connecting remote IP phones. This is a decent option for remote security cameras as well.

The idea behind PoE was to make it easy to send power to devices where you had Ethernet (or could easily wire Ethernet), but no power, but if you happen to have power, but no Ethernet at the place where your PoE-powered device needs to go, a POE PSE Powerline adapter is a better option than a wireless bridge. The Powerline adapter sends its signal via the existing electrical wiring in your house, and will generally encounter less interference than a wireless adapter (unless you have a lot of AC motors running, like vacuum cleaners or heavy machinery).

Side note: no, I am not getting EoP confused with PoE. There really are devices that can go from EoP to PoE in a single unit.

The lowest-clutter solution to connect the phone to the network and provide PoE is a Powerline Ethernet Bridge with PoE Injector, such as the Comtrend Powergrid 9141s-poe Powerline Network Adapter or the COPS-928-POE, available on eBay. 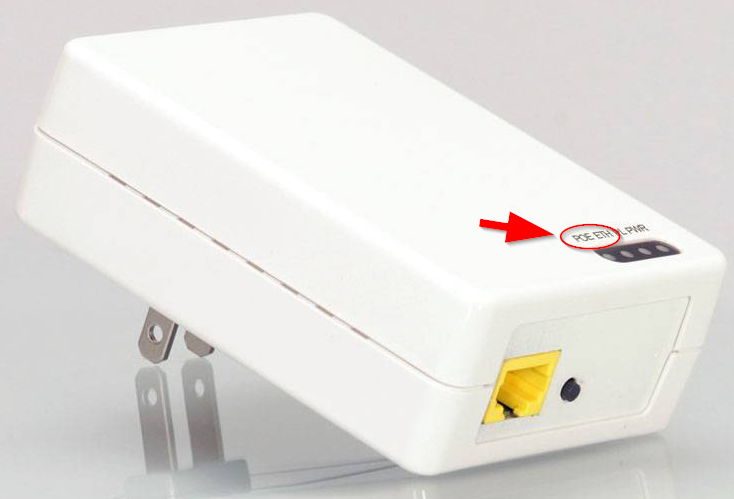 This is slightly more clutter than a wireless bridge, because you also need a Powerline adapter near the router that is compatible with the Homeplug AV standard, such as the TP-Link AV200. But at least the extra clutter is with all your other network equipment clutter, instead of cluttering your desk. 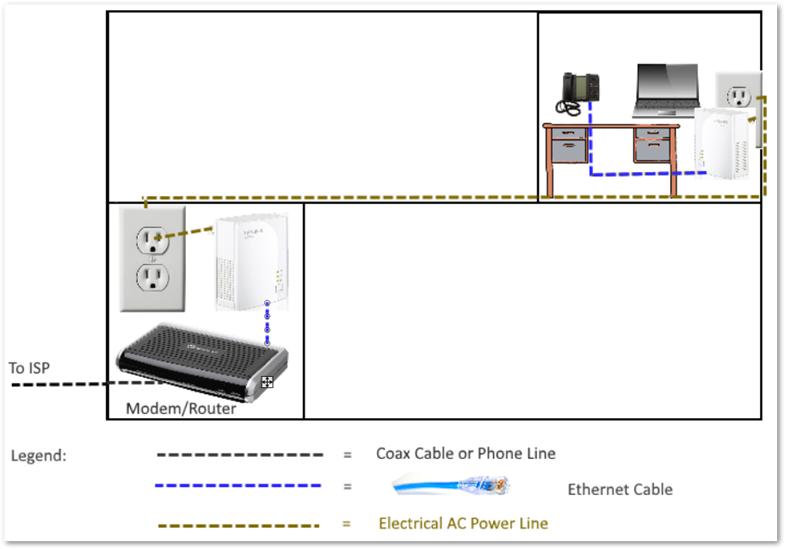 Easy setup: Since this solution is for a home user who will probably need to set it up himself, you want the simplest possible setup. Powerline is plug-and-play: just plug in both adapters and push the button on each one to connect them.

UPDATE (10/24/2016) I tested the COPS-928-POE paired with TP-LINK AV200 Nano. They established a link within seconds after plugging them in. COPS-928-POE powered up my phone right away, and my phone connected to the server a few seconds after the two Powerline adapters established a connection with each other. I hit the security button on both adapters to establish a secure link, and everything reconnected again within 15 seconds. There was no noticeable difference in call quality, compared to my Ethernet connection. Since they are now paired and ready to go, I will be shipping the pair to the home user, confident they will be able to get these set up fairly easily.

Looks promising. Claims to be 802.3af-compliant.

Not the answer you're looking for? Browse other questions tagged wifi poe or ask your own question.

7
Weather station with API access
2
A single modem/wireless router that can create/share three Wi-Fi networks, each of which are to separate connections?
9
Whole home wifi system
1
I need a POE switch that can supply four 32w cameras + one 12w camera
3
Is there a WiFi "bridge" router (or device) that can make a permanent hotspot from a University wireless requires a username and password?
3
One wired computer on a room far from the wireless router