I do quite a bit of camping and backpacking, so I would find a portable solar cell to power my smartphone and laptop quite useful. I would like the solar cell to:

Powering USB devices with solar is pretty easy, powering laptops is much harder. You really see the difference in power needs when you are trying to charge them yourself like this.

I'm based in a country with an unreliable power supply but good sun with a setup that can keep my portable PC charged for about 7-8 hours a day without going to too much trouble. While the exact product I use costs more than your $200 budget, I'm assuming you won't be putting in a full day's work while camping, and there's a lower-power option that should give you a few hours laptop use and a charged USB device on a sunny day that is within your budget. 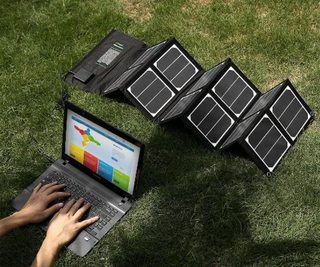 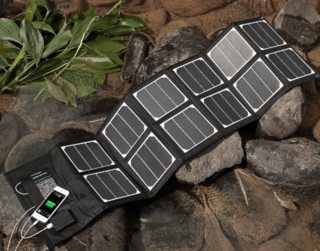 I recommend PowerAdd's panels because they're high efficiency, very portable, durable, and have some basic voltage control built in, at 18 volts which is suitable for most laptops and battery packs, with optional USB output too straight from the panel. They have both DC output (for a laptop or battery pack) and USB output, and can charge both at once (though obviously both will charge slower). Unlike most regular solar panels (not counting expensive kits like GoalZero's) they're explicitly designed with this kind of use in mind, and come with a variety of laptop and USB device adapters (basically everything except Apple adaptors which need to be bought separately). The 60W even comes with a jump lead and can jumpstart a car (though it looks like the 40W doesn't).

I've been using the larger ($259) 60 watt version almost daily for nearly a year now. It's very portable - folds down to the size of a hardback novel, and weighs about the same. It's sturdy, too, and flexible, with a bit of give and bend, and a waterproof canvas. It's survived a tropical rainy season (I kept it out of direct heavy rain but it took plenty of splashes and humidity, and some light rain) and a very dusty atmosphere. The 40 watt will be even more portable, and looks just as sturdy.

There's a bit of an art to setting it up such that it points the right way and also keeps whatever you're charging in the shade - I recommend something like washing line or (what I use) bungey cords with carabiner clips.

Update: the solar market is fast moving and it was over 6 months ago I first looked into this, and since then several new products have appeared that seem to offer the same power and features as the 60W version at the price of the 40W version, from KingSolar (15V), Suaoki (18V) and ALLPOWERS (18V). I know from direct experience that the 60W PowerAdd I use is good, if these are as reliable, they're great value. 40W should be enough for occasional use while camping, 60W will easily be more than enough in an sunny location.

I've not used the 40 watt, but here are some typical real-world outputs from my 60 watt, with an estimated one third reduction applied:

Important consideration: the voltage input range of your laptop battery. First, I'm assuming it's 18V input. It might also be very fussy about its minimum voltage, in which case it'd probably not charge reliably except for in the top two bullet conditions.

For this reason, and for versatility, I never charge my computer directly and instead connect the panel to a battery pack, but direct charging might work better for some laptops. My battery packs don't like charging and discharging at the same time, so I own two, since I'm keeping my computer topped up from one while working during daylight hours while the other is charging, but assuming you're doing outdoors activities during daylight then whatever one does with a laptop while camping after dark, one will be enough for you.

I use Intocircuit 26000mAh which have a pretty decent 15V-19V input range, and are portable (same size as a paperback book, similar weight to a full water bottle) but they cost $99.99 (again, "discounted" from $299.999 but I've never seen them not so discounted) which would exceed your budget. They can also output at 12V and 15V as well as 19V, and as USB, making them very versatile. Weirdly, Anker sell something that is identical (seriously, identical) except smaller and lower capacity (20,000mAh). Weirdly, it's also the exact same price. Maybe you can find it cheaper somewhere making this plus the panel $200 or less.

If you're happy with only one or two hour's laptop use a day, and especially if you have more than one USB device, you could just connect a regular USB-only cheap battery pack with capacity around 7000-11000 mAh alongside the laptop, and it should recharge after about a day, enough to then charge two USB devices, while the laptop gains about an hour or two's charge.

Not the answer you're looking for? Browse other questions tagged solar-power or ask your own question.