My primary wireless router is whatever is built in to my ISP's gateway device, which is subject to somewhat frequent change.

I want to extend this network signal over a larger residential lot. So I'm looking for wireless extenders that:

I have had this need myself (though not to cover an acre) and I eventually got tired of the horrendously poor capabilities offered by ISP devices. Now, rather than using the WiFi settings of those devices, I turn WiFi off completely on the ISP device and use a separate router. Once you have configured your own router to your liking, it is completely plug & play because it is completely independent of the ISP router. I have kept the same set up through fibre, cable, DSL and even a move to a different country.

I started with the venerable Linksys WRT-54G (that will show you how long ago this was - I loved that router), and that meant that I discovered the fantastic DD-WRT firmware.

Since then, DD-WRT compatibility has been my number one requirement when upgrading to the latest tech. First, I went for the Linksys WRT-600N, added a Buffalo N600 as an extender (which comes with DD-WRT as stock firmware) and now use a Netgear Nighthawk R7000 as my primary router with the older Linksys as my range extender.

That's worth noting: you don't have to specifically buy an extender, any router with decent firmware can be configured to function as an extender while still giving you the option to use it as an AP later.

In terms of actual recommendations, the aforementioned Nighthawk is pricey but has been excellent for me so far. It has plenty of horsepower, USB 3.0 support and more. Netgear also has a range extender model that I have not used personally but have heard good things about from friends.

Plus, I personally think it looks cool :) 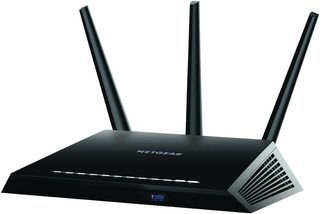 To cover larger areas, you can also replace the antennae on many routers (Nighthawk included) with larger, extendable, high gain antennae so that you can mount them away from the router and get far better coverage. If you are on a budget I once used a colander as a make-shift directional antenna to better enable line of sight connectivity to another router.

One other note: if you have a router with separately configurable 2.4 and 5Ghz interfaces then you can restrict the lower range, lower speed legacy devices (b, g) to the 2.4Ghz spectrum only and take full advantage of the 5Ghz goodness and better range offered by N and AC on the more modern devices. Again, this is something I have done very successfully with DD-WRT on the Linksys and the Netgear models - I have one network with a -g postfix using the 2.4 network (actually N in mixed mode) and one with -n (which is AC, N only), both with the same password.

Not the answer you're looking for? Browse other questions tagged networking wifi or ask your own question.