Okay, we found an extra HP NC522SFP Dual Port 10GbE Gigabit Server Adapter (468332-B21) at a site and I got it put into an HP Proliant server and it sees it, loaded drivers, etc.

I read over the QuickSpecs and according to this, it seems you have to use either an SFP DAC cable or get a fiber optics SFP GBIC module and I cannot find anything about any copper SFP GBIC modules to use for a transceiver.

Question: Does anyone have any recommendations on any verified and confirmed compatible GBIC adapters that work with this card that is copper and either 1 GbE or 10 GbE that gives just an Ethernet port to plug in an Ethernet cable?

I am unaware of SPF(+) to copper interfaces. That does not mean that they do not exits.
If they do exist then compatability is not a guarantee, so a call to HP is probably a good idea. If only to get an article number to search further on, since I expect the HP price to be 'not low'.

Based on the goal that you just need two additional 1 GbE ports:
Swap the card. PCI-e cards with 2 or even 4 interface to regular copper are common, relative cheap and just work.

I linked to two potential cards, but theere are many more than just these two:

For future compatability and less down time (e.g. not swapping to a newer card if you get a more capable switch in the next year or two), try regular copper cards with higher speeds.

There are now desktop cards which support old format (100/1000mbit), but also 2½Gbit, 5Gbit and 10Gbit. Those could be used at the old speed with the current switch, and with a more modern switch you could do higher speeds.

Some more notes:
We have at least two generations of these cards already, and that the older ones draw a relative high amount of power. That makes this a trade off between adding a classic 1GBit multiport card now and upgrading later. Or spending a relative large amount now and having less downtime later.

Modern DP proliants (G9 or G10) often come with something called 'flexible LOM', where you can choose for native 10Gbit rather than for a few 1Gbit ports.

Quick googling finds a few examples of 10Gbit copper, but at not entirely trivial prices. 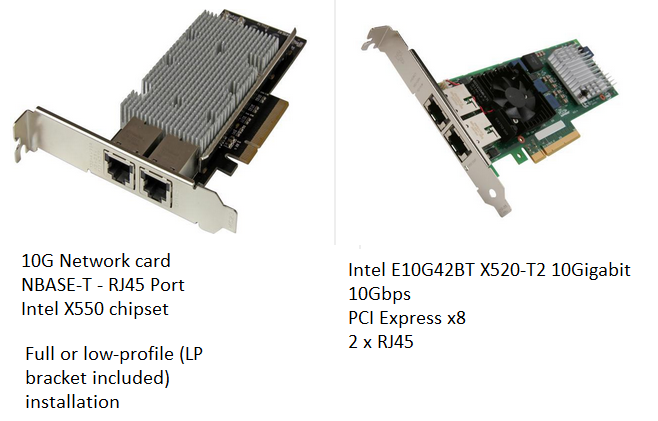 One of which seems suitable for a server with high internal airflow and no single point of failure fan.

Not the answer you're looking for? Browse other questions tagged compatibility network-adapter or ask your own question.