As you can read in this Super User question, I'm having a hard time getting two external 2.5" platter-based hard drives to run in USB 3.0 mode simultaneously off a single USB 3.0 port.

Can anyone recommend a USB3 hub with individual switches for each port that can definitely accomplish this task?

I was originally thinking of recommending you a wall plugged USB hub, however; it seems you already went that route and the hubs were unable to negotiate the power necessary for reliability. Because of this, I had to take a step back and think of an approach that would be guaranteed to run two HDD's at the same time. I ultimately decided to recommend you specialized hardware designed for your exact user case scenario. 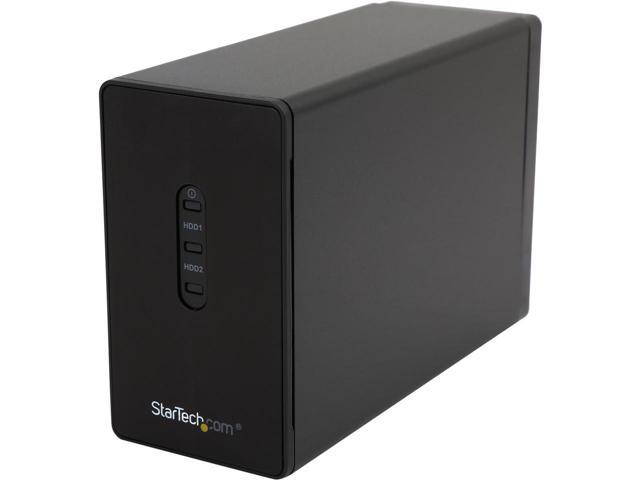 In practice, this system acts as a hardware layer between your HDD's and you target machine with a mini-PSU strapped to the back. This system will most definitely be able to handle your user case scenarios. Here's a video of the enclosure in action. It will of course, need to plug into the wall with an AC to DC adapter.

There is also a USB 3.1 variant for $86.99 (MSRP: 125.99) and a Thunderbolt 2 variant for $236.37 ($326.99). Personally, I would stick with the USB 3.0 variant I recommended above as SATA III only supports up to 6 Gb/s anyway. The other 2 variants are overkill unless you want fan speed control and/or configure the system for a RAID 0 (striping) SSD configuration and purchase SSDs actually capable of 750 MB/s+ combined simultaneous read and write speeds. I say SSDs because any HDD you buy is pretty much never going to actually hit the SATA III limit anyway.

Not the answer you're looking for? Browse other questions tagged usb hard-disk hub or ask your own question.

1
USB3.0 RAID 1 enclosure that can be connected to my new router