I really need to find a surge suppressor that works!

I have just had my third desktop PC in four years fried by an apparent power surge during a thunderstorm. We rent an ancient house in Western North Carolina (read: "awful Duke Energy electrical grid and wiring that was installed shortly after Ben Franklin went kite-flying"), so I can't fix any of that.

Four years ago, there was a (probably) lightning-generated surge that took out a (turned off) desktop PC, my beloved gaming rig, one monitor, the ISP's modem, my Linksys router and an electric blanket.

Yesterday, another lightning-generated surge took out my (turned off but plugged in) gaming rig and, weirdly, whatever gizmo there is in the ISP's Arris router that handles ethernet connections - its wifi still works.

Neither of these surges damaged anything else and they didn't knock out the power or blow a breaker.

Is there a surge suppressor that can protect electronics from this kind of thing? The fellow from the ISP that replaced the modem four years ago told me that nothing can contain a surge like that and that the only sure way to protect my gear is to unplug it during electrical storms. Is he right?

Lightning is a hard problem.

I'd love to say there's a slick little product you can "Amazon and it's done", but not all problems can be solved that way (plus, other answerers are already doing that.) That said, I promise there'll be some products mentioned.

On the high side of the transformer: Transformers are pretty good surge suppressors, so suppressing surges on the "high" side of the transformer helps a lot. Power distribution lines (the big 2400V lines that are the top row) have a couple defenses. First, a "top wire" (OHGW) that is set above the 3 bare conductors - its job is to catch the lightning bolt instead of the conductors. Second, a lightning arrestor device connecting each conductor to ground. It has an engineered gap - wide enough to stop 2400V from arcing to ground, but still allow lightning to leap to ground. These can wear out/burn up from strikes, and leave too-wide a gap to be effective. You can't do anything about this stuff. But you can walk your neighborhood distribution lines (on the high side of your transformer) and see if Duke has installed them, and shout a lot if they haven't.

Make sure your house's grounding/earthing is tip-top. I realize you're a renter and can't do this. But correct, modern grounding is an absolute requirement for some surge suppression systems to work, and certainly to qualify for any "power strip warranties". Surge suppressors need ground as a place to dump the surges! All electricity wants to return to source, and natural electricity's (lightning) source is the earth. If you can't make your house's grounding tip-top, don't bother with surge suppressing power strips or whole-house suppressors. They won't work.

Make sure comms entrances are also grounded. Code requires that your cable TV, phone/DSL etc. lines go through a lightning arrestor on the outside of the house. These arrestors need to be very well grounded, ideally just a few feet away from a ground rod (better: two) going into the earth. A renter might be able to pester the ISP to fit quality surge suppressors on cable/phone. However, if the ground wire is thin, and has to be carried some long distance to get to the ground rod, it's almost a waste of time.

Defend against neutral problems. Problems with neutral can cause voltages that should be 120V to fluctuate wildly between 0 and 240V. However this is easily handled by auto-ranging switching power supplies - the kind rated to function on a range of voltage such as 100-264V or 90-306V. They autorange on the fly, and when they get a spike that's below 264V, they just treat it like more usable power. Many products are already this; just make sure yours are. 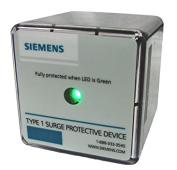 If you were hardcore, I suppose you could buy a large metal electrical box, put a cord and strain relief on it, and a whole-house surge suppressor and some sockets. Voilà, the world's biggest baddest surge suppressing power strip. 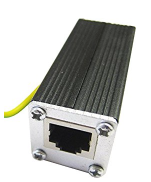 Buy quality power supplies. Since it sounds like you build your gaming rig, don't treat the power supply like an afterthought or buy one for the flashy lights. Buy the best. Server tier power supplies are not excessive at all. A good power supply can take a lot of hits, because that's its job. VESA isn't famous for taking surges. Buy ones that are. 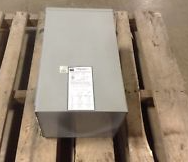 An isolation transformer. Here's something a tenant can do! However these things are massive with an iron core and copper windings. Transformers (like the one on your neighborhood's utility pole) are huge inductors tuned to one frequency: 50 or 60 Hz depending which continent you are on. Like any large inductor, they only like to pass 50/60Hz, so they tend to block spikes and surges. If you have any other lightning arresting in place, that should keep spike voltage low enough that it won't leap the transformer's insulation. Place your equipment on the isolated side of the transformer, and it should see almost no external noise.

I am reluctant to say "ground the isolated side of the power supply" if your house's grounds aren't very good. It may be better to leave it an isolated system, except then you'll end up with an islanded ground. I'd fix that with GFCI. Every piece of interconnected equipment needs to be on the isolation, except for modems and routers - otherwise the connecting cords will simply carry the spike around the isolation transformer.

Acquiring an isolation transformer can be tricky. First, it's not a step-up/down transformer. You can just up-n-buy one from Amazon, but the price may hurt. I see "5 KVA" service transformers all the time on Craigslist for $100 or so, and those'll work just fine as an isolation transformer with an excess of capacity -- but you'll need a 240V power source and some help from an electrician to set it up. In that case I would probably get a small rack and set it up like a PDU. Craigslist sometimes sees 1.5 KVA transformers that are much lighter weight.

You need an isolation transformer of appropriate size (look on your equipment's nameplate for its rating in VA [similar to watts but not quite the same], otherwise multiply amps by your line voltage: 120 or 230V). Expect cheap gaming rigs to have numbers in the 1200 VA range (yes I know the power supply says "850W"!) If you can measure actual peak draw with a Kill-a-Watt, you can go with that number instead.

Generally, you need something like this. It is a UPS power regulator. Just make sure the PC is plugged into one of the UPS outlets and not just the surge protector outlets.

Also, send the phone and/or cable through it. Cable in particular is a fat copper cable that can carry a large surge if struck by lightning.

While Dan Sp. suggestion will definitely work, I feel that spending $200 on a UPS is a bit overkill for your applications. Unlike my recommendation, however, it will keep your computer running for a few minutes if the power is interrupted which would allow time for your computer to sleep (most UPS systems come with software to do this for you automatically). I would still like to recommend a significantly cheaper alternative that can protect against Ethernet/co-axial/telephone as well.

In addition, UPS systems in general, may not protect you via Ethernet, coaxial, or telephone lines, and not doing so may void your equipment protection policy should you choose to exercise it in many cases. 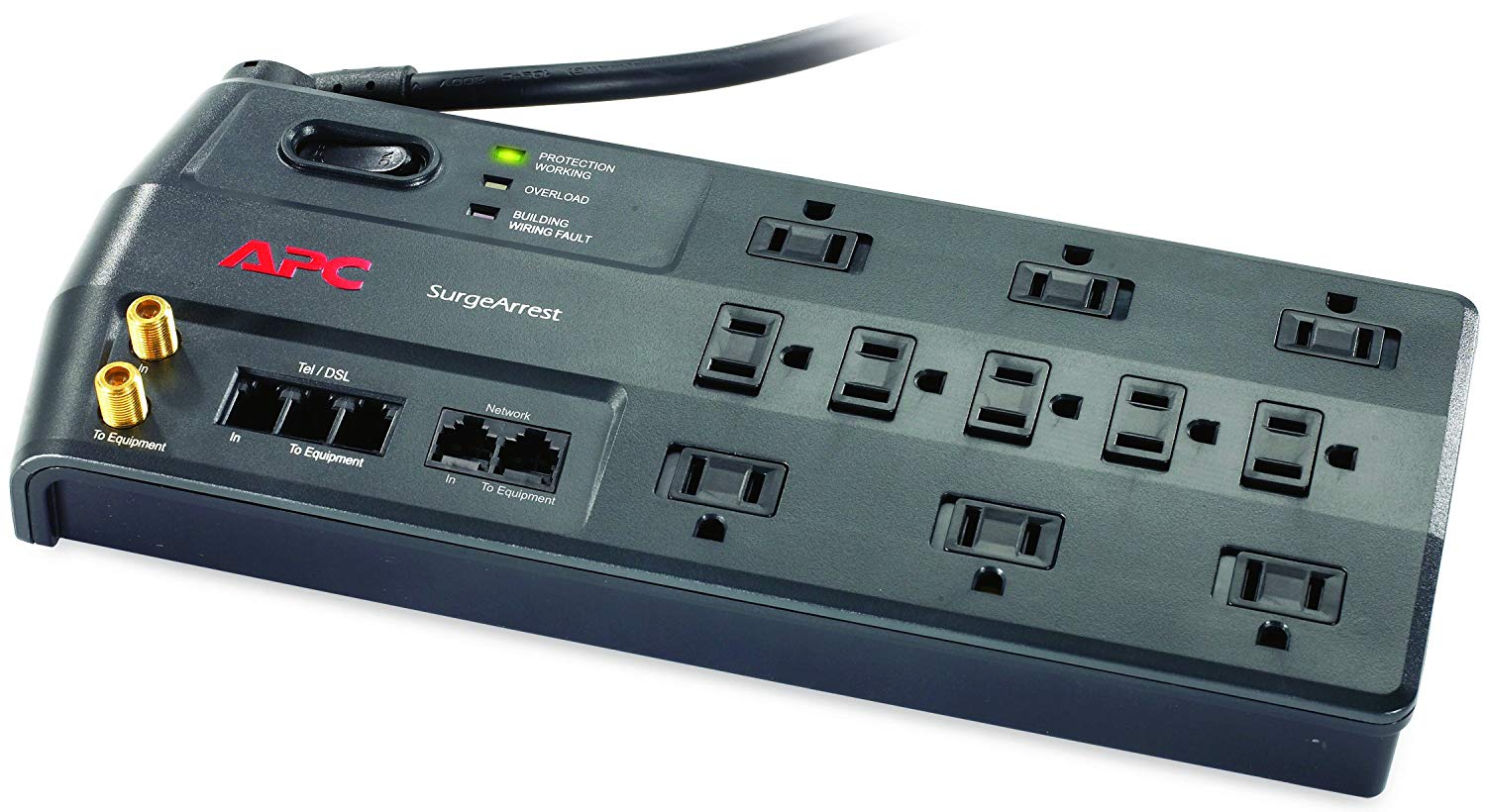 This power surge protector comes with a Lifetime : $100,000 equipment protection policy. It is also featured on Lifehacker as one of the best surge protectors, and voted one by users as of the best on Co-op the Inventory. If you want to make use of the EPP, you should register the product by returning to APC the warranty card provided with the product within 10 days of purchase. In addition, Any claim under the Equipment Protection Policy must be made within 10 days of the date of alleged damage to the connected equipment.

You must register the product by returning to APC the warranty card provided with the product within 10 days of purchase. All information must be filled in, and you should retain a copy for your records. The warranty card must clearly identify the types of electronic equipment that will be plugged into the APC product for which protection under this policy is claimed. All connected equipment must be UL or CSA approved. The APC product must be plugged into properly wired and grounded outlets; no extension cords, adapters, other ground wires, or electrical connections may be used, with the sole exception of other standard APC 120 volt products. The installation must not include power protection products made by any manufacturer other than APC. The installation must comply with all applicable electrical and safety codes set forth pursuant to the National Electrical Code (NEC). Any claim under the Equipment Protection Policy must be made within 10 days of the date of alleged damage to the connected equipment. The Equipment Protection Policy covers only standard APC 120V products used in the 50 U.S. states, Canada, Bermuda* and/or Puerto Rico*.

Not the answer you're looking for? Browse other questions tagged power-supply or ask your own question.

7
Are there any USB battery packs that can provide power while charging?
4
UPS that supplies 50W for 10hrs?
0
Which PSU do I need for this setup?