I'm looking for a small laptop with a 10.1 to 11.6 inch screen and an x86 or x86-64 CPU that runs GNU/Linux without hardware incompatibility. Are there any good ones? Or how should I go about finding one?

What I use now

Because the buses in my city do not offer Wi-Fi, I often open several pages in tabs in Firefox, board the bus, and read them. Using suspend this way is a lot cheaper than subscribing to mobile broadband.

Why I must replace it

I've decided that eventually I'll need to replace my laptop for several reasons.

But at the end of 2012, manufacturers discontinued their netbook lines. The closest thing to a netbook nowadays is a 2-in-1 tablet with a clip-on keyboard, such as an ASUS Transformer Book (T100TA), or a 11.6" laptop such as the ASUS EeeBook (X205TA). But I've read that 2-in-1s have severe hardware compatibility problems problems with Linux. The DebianOn reports for T100TA and X205TA mention problems getting basic things such as Wi-Fi, audio, and suspend to work.

I've been XY'd up and down

When I have explained this problem to others, many have assumed an XY problem on my part and recommended other devices. Each has drawbacks:

There are a variety of notebooks that are capable of running Linux, and some even have it pre-installed by the manufacturer:

A lightweight notebook, but its 13.3" screen size may be too large for you. It does however come with Ubuntu 14.04 pre-installed, so hardware support for Linux is 100%. It's a bit on the pricey side though, but probably the laptop with the highest compatibility for Linux in this answer.

It also uses the previous (but no less worthy- Intel 5th Generation Core i5 CPU) generation hardware, but however it is the smallest XPS 13

This netbook has a 10.1" screen, so it's within your specification. It is Windows-centred, but however an Ubuntu edition is available; this suggests that one pre-installed with Windows can be wiped & installed with Ubuntu instead without hardware incompatibility.

However it does use outdated hardware (the Celeron 847 it uses was first released in 2011), so you might find issues running NO$SNS & multitasking.

If you have a smartphone with a data plan (and it's an extensive data plan with a significant data allowance/unlimited data), you can tether it to your netbook via a cable or WiFi. PAYG (Pay as You Go [prepay]) plans sometimes offer great deals for mobile data (my own for example, offers a week's worth of free unlimited data when I top-up), so it might be worth having a brief look at PAYG plans too.

Why not purchase a larger laptop & get a bag-pack? Most reasonably-sized bags will fit a 15.6" laptop, and is not a 'traditional laptop bag' so it is less likely to be a target for thieves (as its contents are far less obvious). Doing so would dramatically open up your options for your new laptop, plus it will last far longer.

T100TA and X205TA are both of Bay Trail-T architecture, that is not properly supported by Linux yet. Actually they are not laptops, they are tablets. You'd better to look at Asus VivoBook X202E, HP Pavilion TouchSmart 11z or Asus Q200 which are traditional laptops. Also you can dual-boot almost any chrome-book with your Linux.

Please check your final choice against this database of Linux-supported computers: http://linux-hardware.org/index.php?view=computers&type=notebook

I'm writing this with a second hand Lenovo X230 with a 12 inch screen. Cheap, easily repairable and certified by Ubuntu.

The only thing that needed tweaking was the touchpad.

I would recommend a ThinkPad X240. You can buy them used from eBay for a very affordable price definitely under $500.

I have been using my ThinkPad X240 for nearly 2 years now and I am running Kubuntu. It works flawlessly out of the box, though I would recommend you install TLP and Powertop for better battery life.

The Haswell ultra-low voltage CPUs have great power management on the latest linux Kernel. Although there is only 1 DIMM slot, it takes up to an 8GB stick.

Also this is quite a small laptop, and the battery life is great, so it's easy to whip out quickly when you need to use it, even if you're in confined spaces. 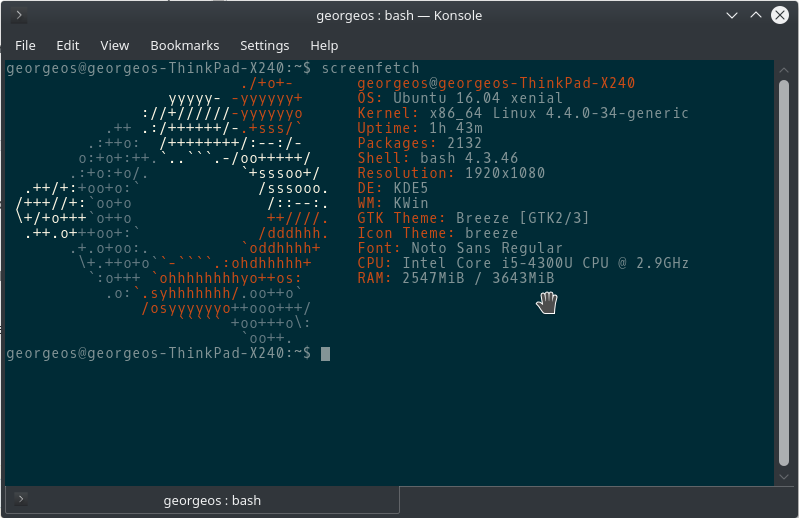 Just searching ThinkPad X240 on eBay yields many sub-$500 offerings. Don't be afraid to get a used ThinkPad, they are built really tough, even the new Lenovo ones.

I'm looking for a small laptop with a 10.1 to 11.6 inch screen and an x86 or x86-64 CPU that runs GNU/Linux without hardware incompatibility. Are there any good ones?

My current laptop is a Dell Inspiron mini 1012

[…] I use it for hobby programming projects while riding the city bus to and from my day job.

One of my screens got cracked in public transport, so I understand why you prefer smaller devices. Is this your Dell mini 1012?

Such small screen sizes usually only feature a 1366x768 resolution at this time. Even though you are used to 10.1 you may want to look a bit beyond 11.6 and get FHD or better screens in return.

We might need to reevaluate this list from time to time. The move to Android apps solved some problems but I'm not saying that it solves yours. Containers on Chrome OS aka Crostini though may solve your problem, but it's not clear at the moment if it takes one update cycle (6 weeks), more than a few months or if it happens this year at all judging by how it went with Android apps on Chrome OS.

A Chromebook with Crouton begs the user to press space to reenable OS verification (which wipes the drive) every time it turns on. I'm told tools by John Lewis can remove this verification warning from the bootloader, but I assume they void the manufacturer's warranty, and I've had to use my current laptop's warranty before on a loose power jack.

VictoryGoth posts weekly advice on reddit, at the moment the following devices would meet your criteria, be sure to check that the processor is not an ARM one though:

As I said, I would check 12.5" models too should you go with a Chromebook, you get higher resolutions and better processors.

Not the answer you're looking for? Browse other questions tagged laptop linux or ask your own question.

4
Spec's for Eclipse and Android Studio
7
cheapest ARM computer capable of running a Linux Desktop smoothly
5
What laptop should I buy? (Web Developer, Linux)
5
ATX Motherboard with ATA password option and GNU/Linux compatibility
2
Buying a Windows laptop, then install Linux on it?
0
USB 3.0 Express Card for Linux
1
Alternative for Asus EEE PC that supports GNU/Linux out of the box?
1
Purchasing Chromebook for Ubuntu installation and programming