I want to build a PC with my son. Or rather, at some point have it so he gets to build it (I'm thinking of torturing him by re-formatting Linux every so often and having him reinstall it). I'd like to do with it mini-ITX for a number of reasons, one of which is that he could take it over to his mom's on alternate weeks.

I have build PCs from scratch before, but a long time ago, on full size desktops. I'm also fairly comfortable with Linux installs.

Here are some criteria/considerations for me:

Share some pointers or war stories? I'm not so much asking for detailed parts list as general considerations of what to look out for from people who've done this and the reasoning that would lead you to choose one class of components over another.

Edit: budget 400-600$ preferably, not including monitor, keyboard and mouse. To an extent, I'm good with used, and we have some really good donation places - rather get good stuff at core, w cheap secondary stuff that I can swap out later. A cheap used, or new, GPU would be OK too, I can always update it later.

Because upgradability and the experience with your son seem to be important to you, I'm going to rule laptops, NUCs, and other prebuilt solutions out of hand. To be clear, this isn't to say that a laptop + evideo card or something along those lines would be a particular poor solution in terms of the end product–I might even argue better–but it seems to conflict with your mission.

With that in mind, it's time to build a SFF PC!

The thing about a case is that it's ultimately a matter of taste, and I can't decide that for you. With that, I'm going to provide a range of good cases and let you choose what you like.

That said, I'm going to recommend the Node 202 on personal preference. 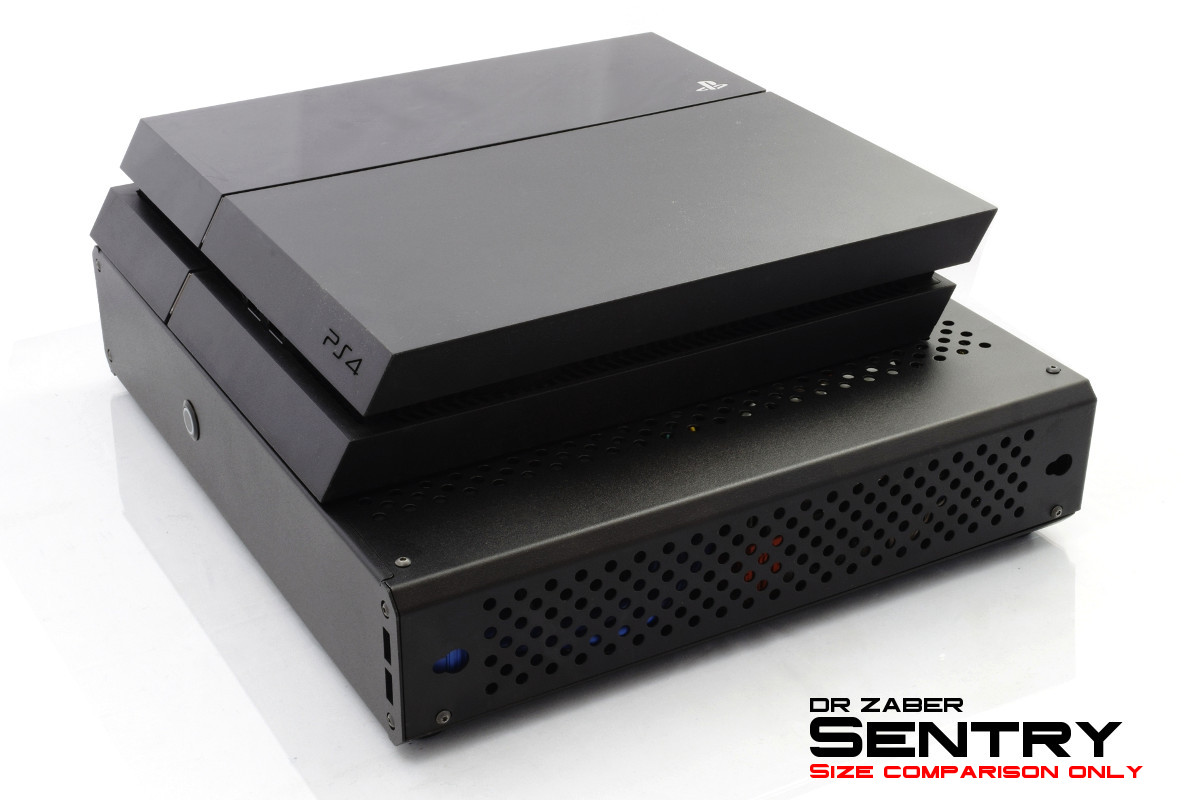 It's the smallest case in this category, but with that come some serious compromises. video card compatibility is very limited, drive mounting is limited, and most of all, PSU compatibility is virtually nil, with only two PSUs listed: a $95 400W DC-DC and a $58 200W DC-DC. If you really value space, this is the way to go; but otherwise, I'd stay away. 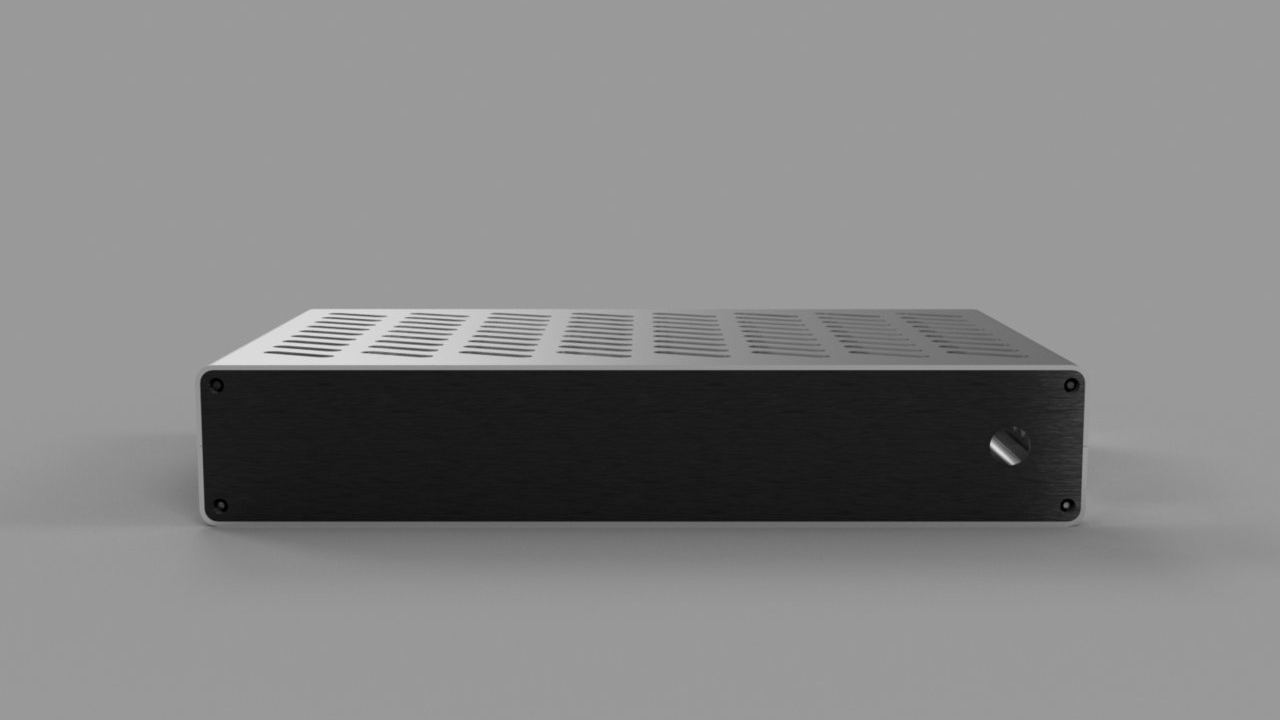 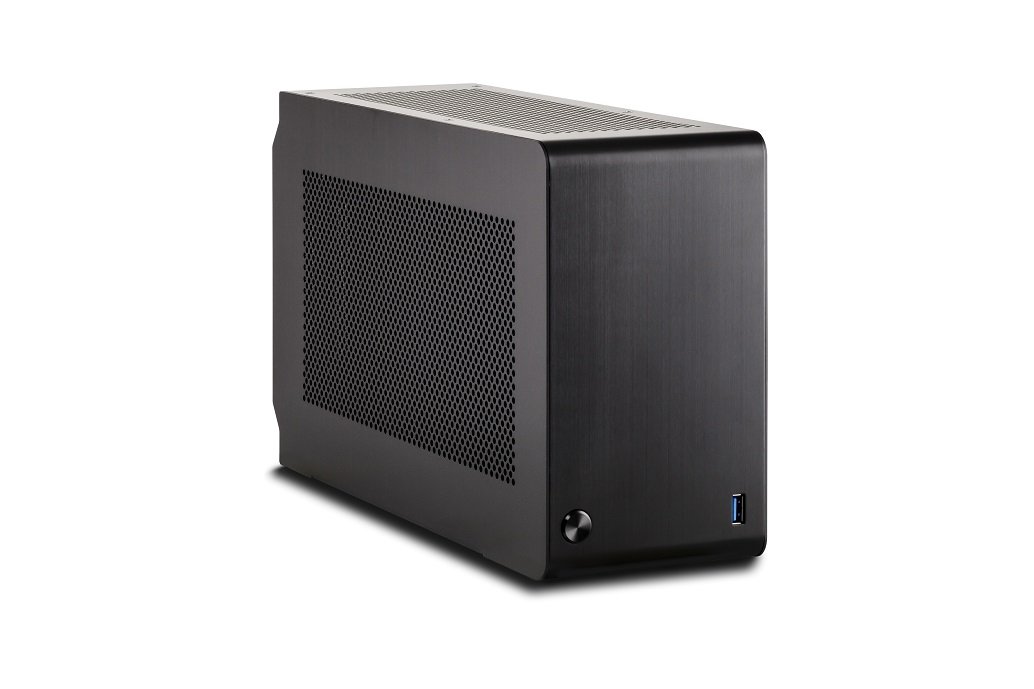 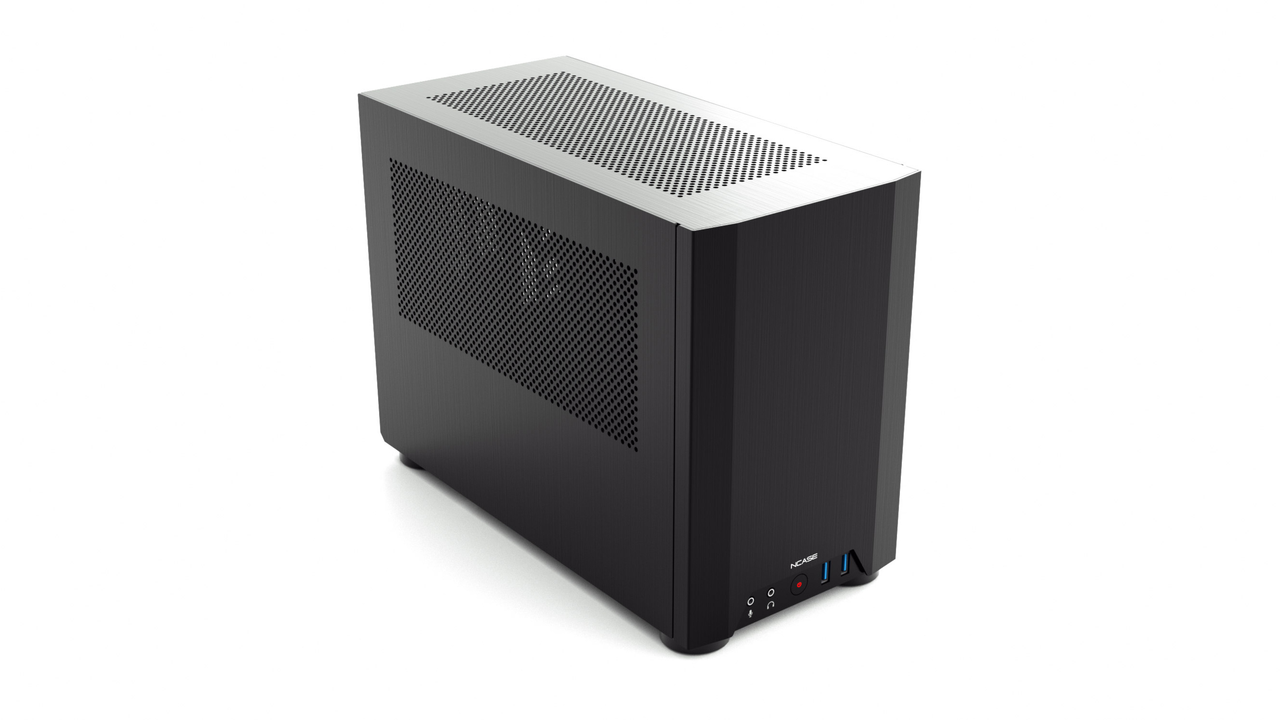 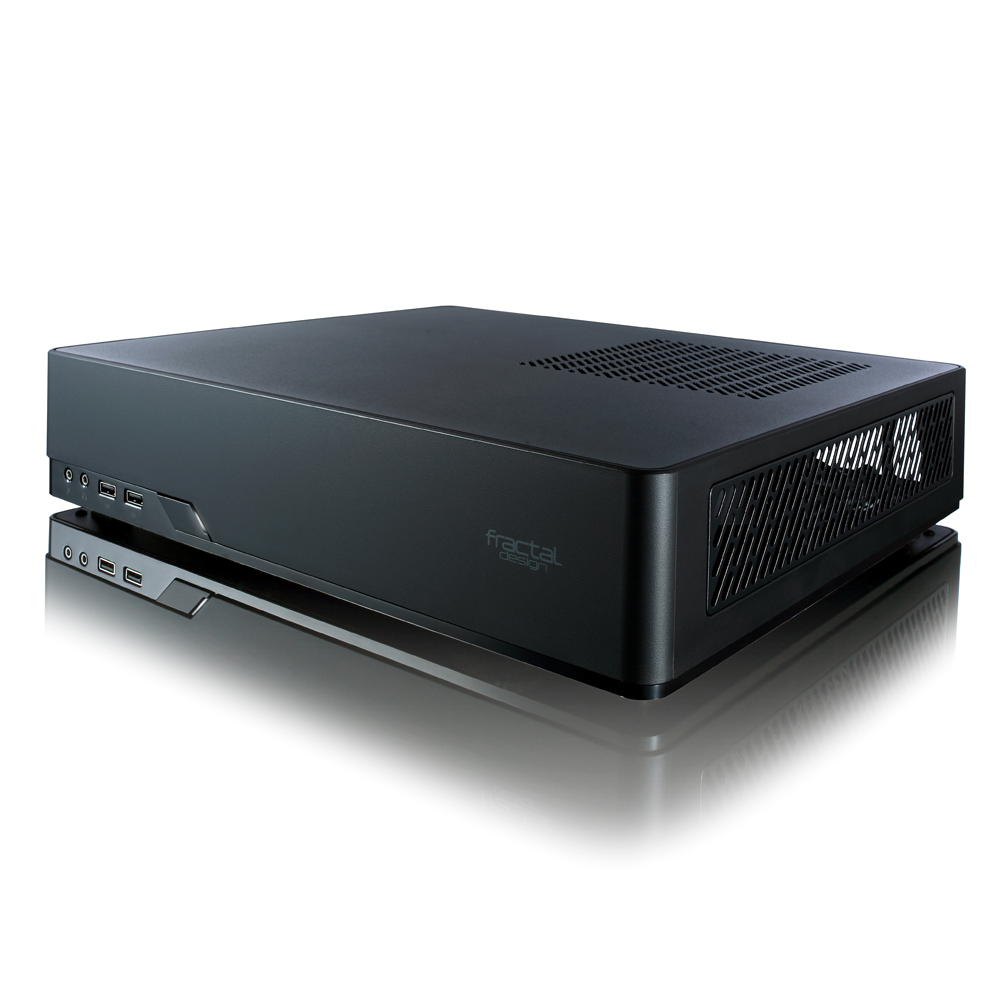 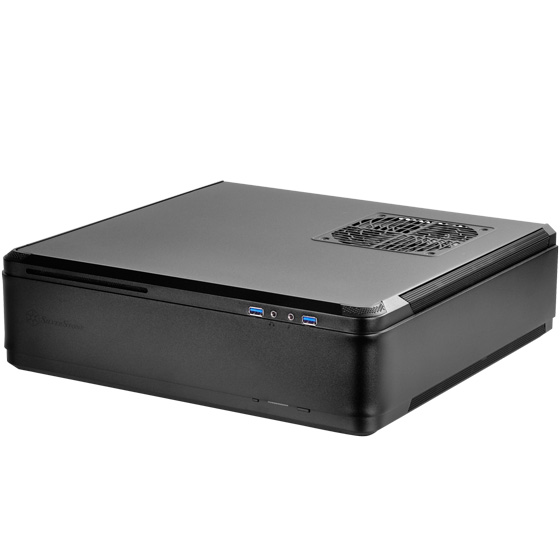 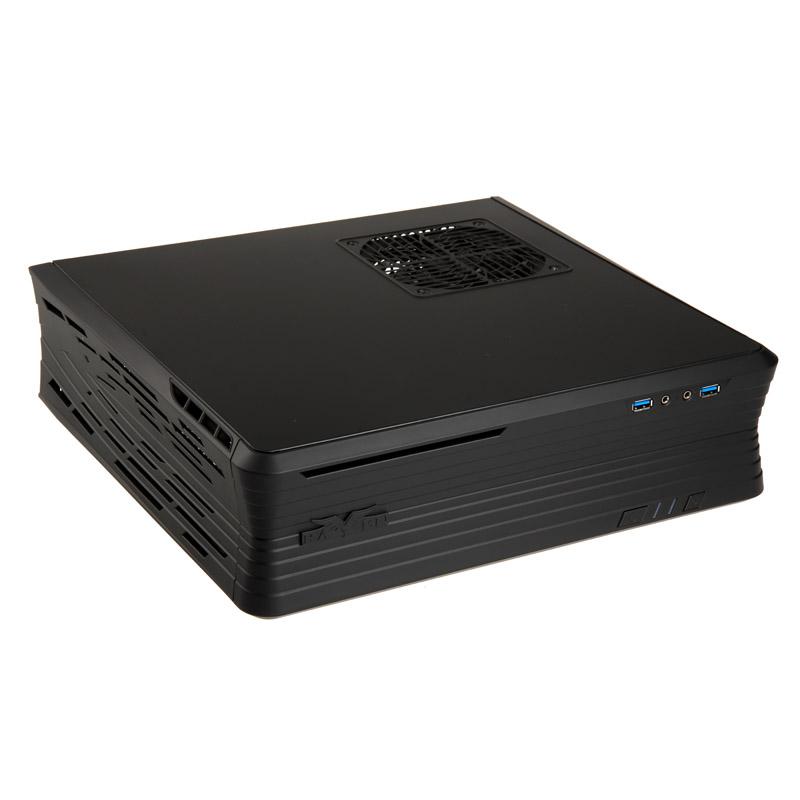 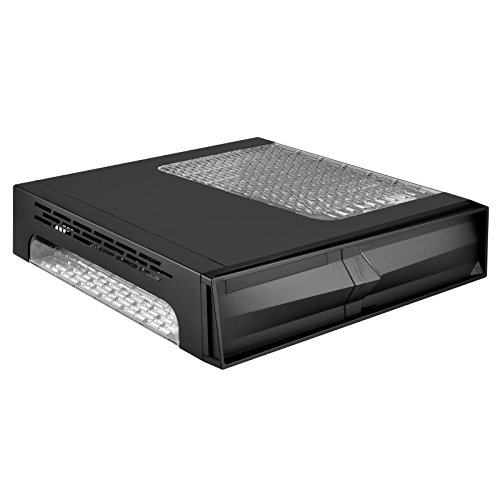 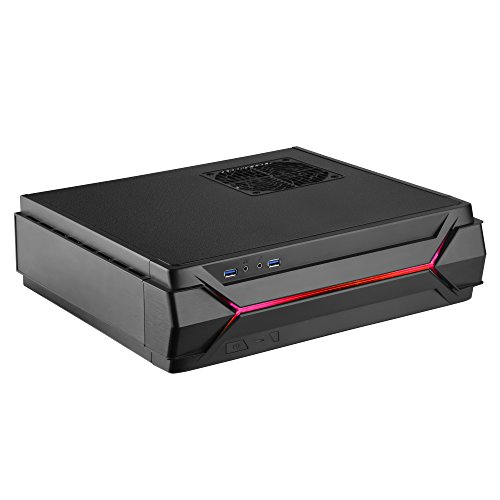 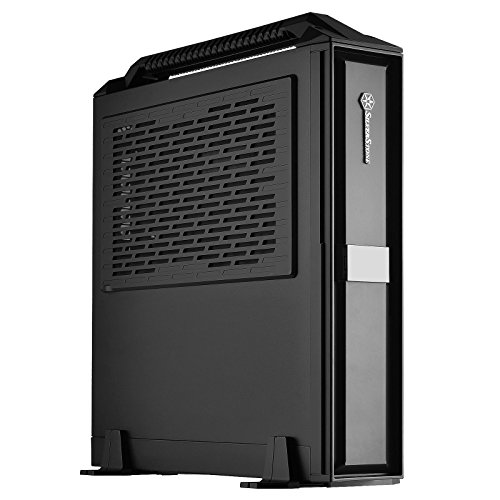 The Silverstone SG05 and Silverstone SG06 are neat, but the 250mm video card support kills my recommendation. The Fractal Design Array R2, Lian-Li Q09, Raidmax Element, SilverStone SG07 and SG08, and Xigmatek Eris EN6305 are no longer in production, though they would make perfectly good boxes if you can find them. 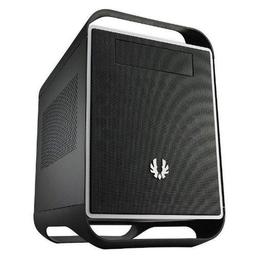 I'll be leaving out case recommendations from these options; choose whatever you think is best. If you end up needing an SFX PSU, use this list and get whatever wattage you need; if you need an ATX PSU, use this list. CPU cooler is likewise dependent on case selection, but I'll be using the stock cooler as reference, or the Cryorig C7 when not applicable. I'm allocating about $130 to these parts from the rest of these builds.

Final thoughts: I would personally go with option #3. Used components are a great way to get value on a budget.

To keep things simple, right now, on a $/performance basis, on the middle-high end, AMD wins in heavily multithreaded workloads, and Intel wins in single threaded workloads. Intel also wins in power consumption (though most of that will ultimately come from the GPU.) Given that gaming appears to be your intended use case, I'd recommend Intel. That said, I'm going to provide AMD builds as an option anyways.

Because this is likely going to be stuffed in a small case, I didn't bother concerning myself with looks at all. That said, if you do decide this is something important, you can of course tune the parametric filters to have the colors of your choice, and get a heatspreader if the M.2 drive is ugly.

Great, new components and a focus on an immediate future upgrade. 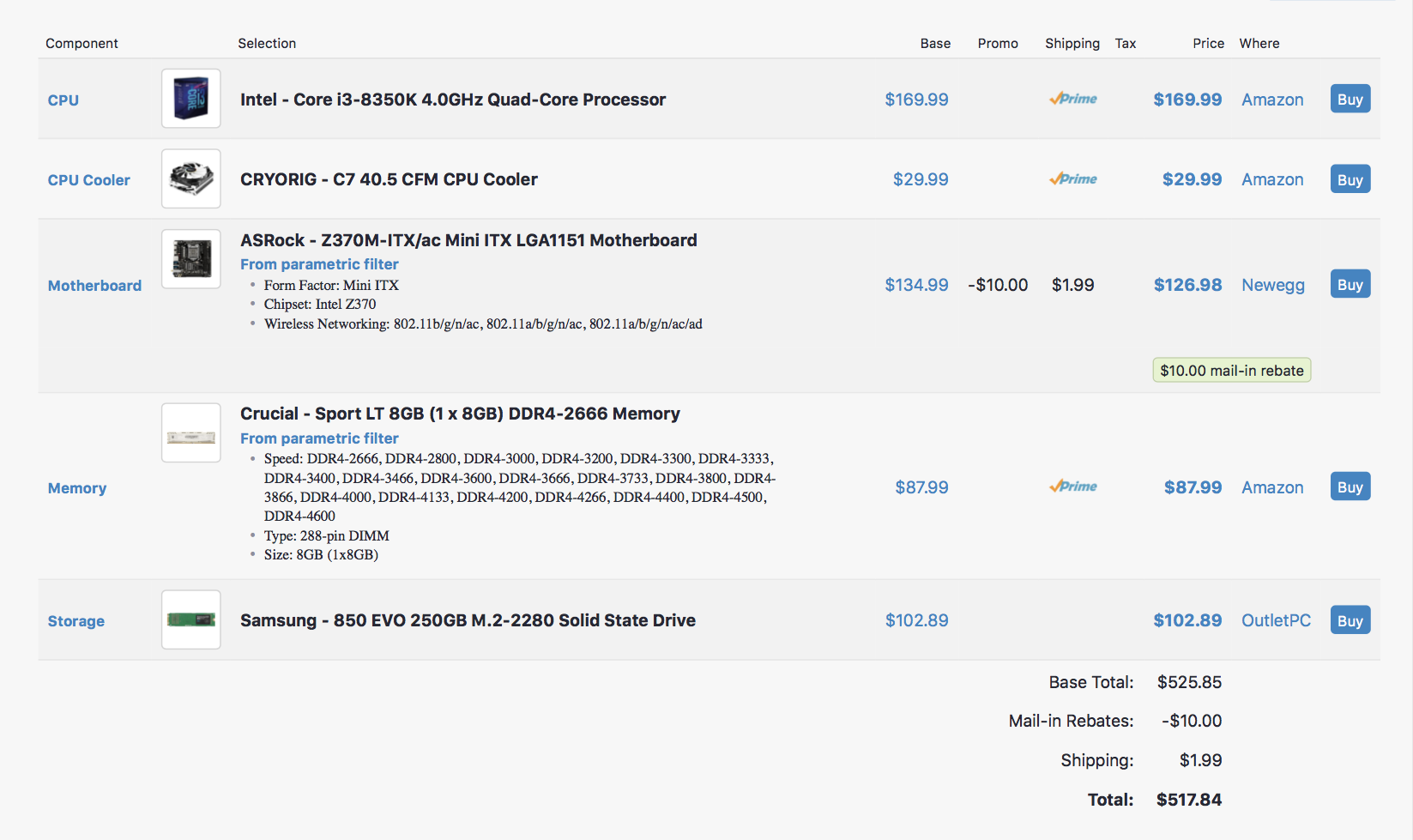 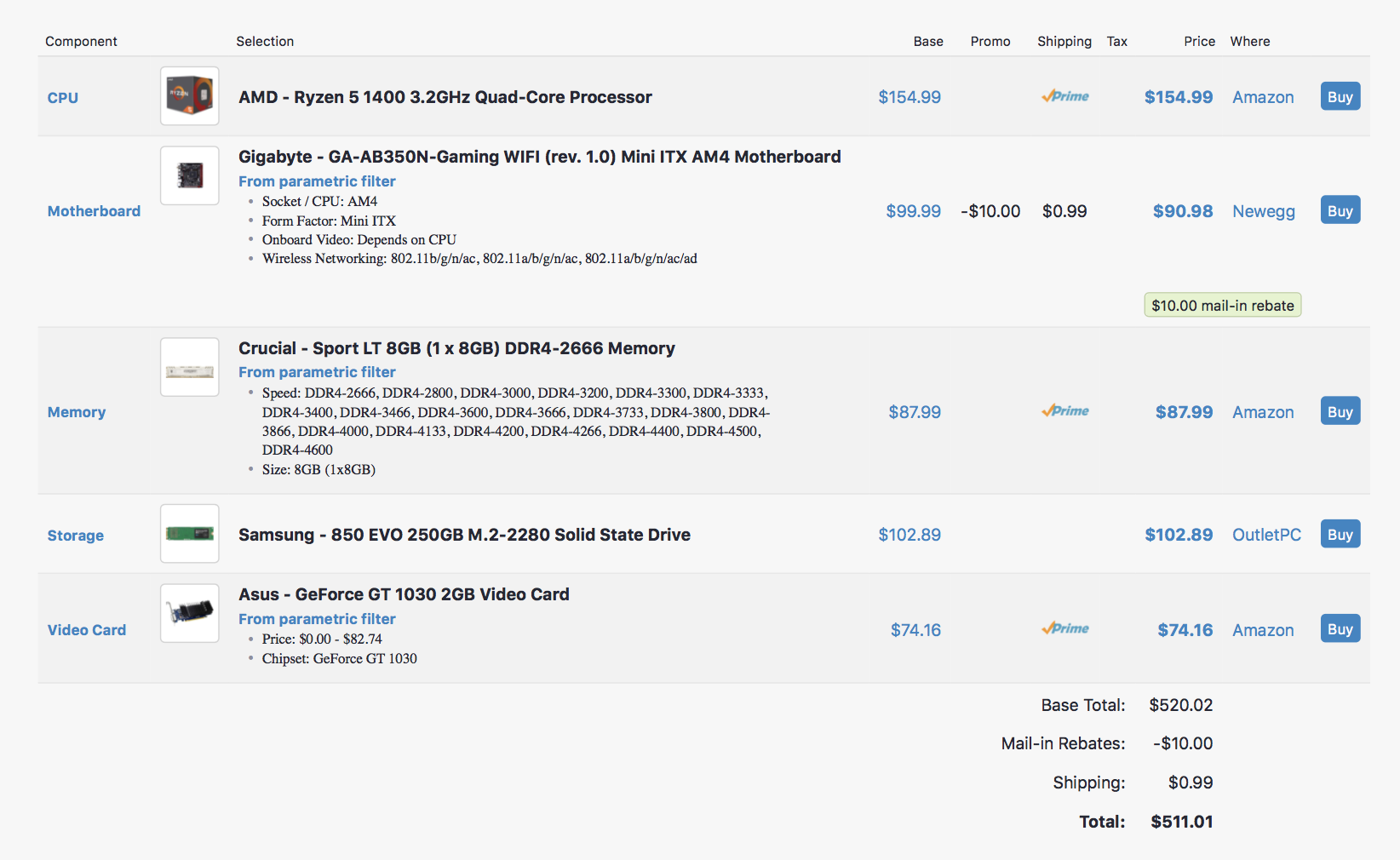 Intel unfortunately just doesn't have a CPU in the Coffee Lake lineup at this price point, so no build from them there. I'm not going to recommend last-gen hardware in a build for which upgradability is the main selling point either. 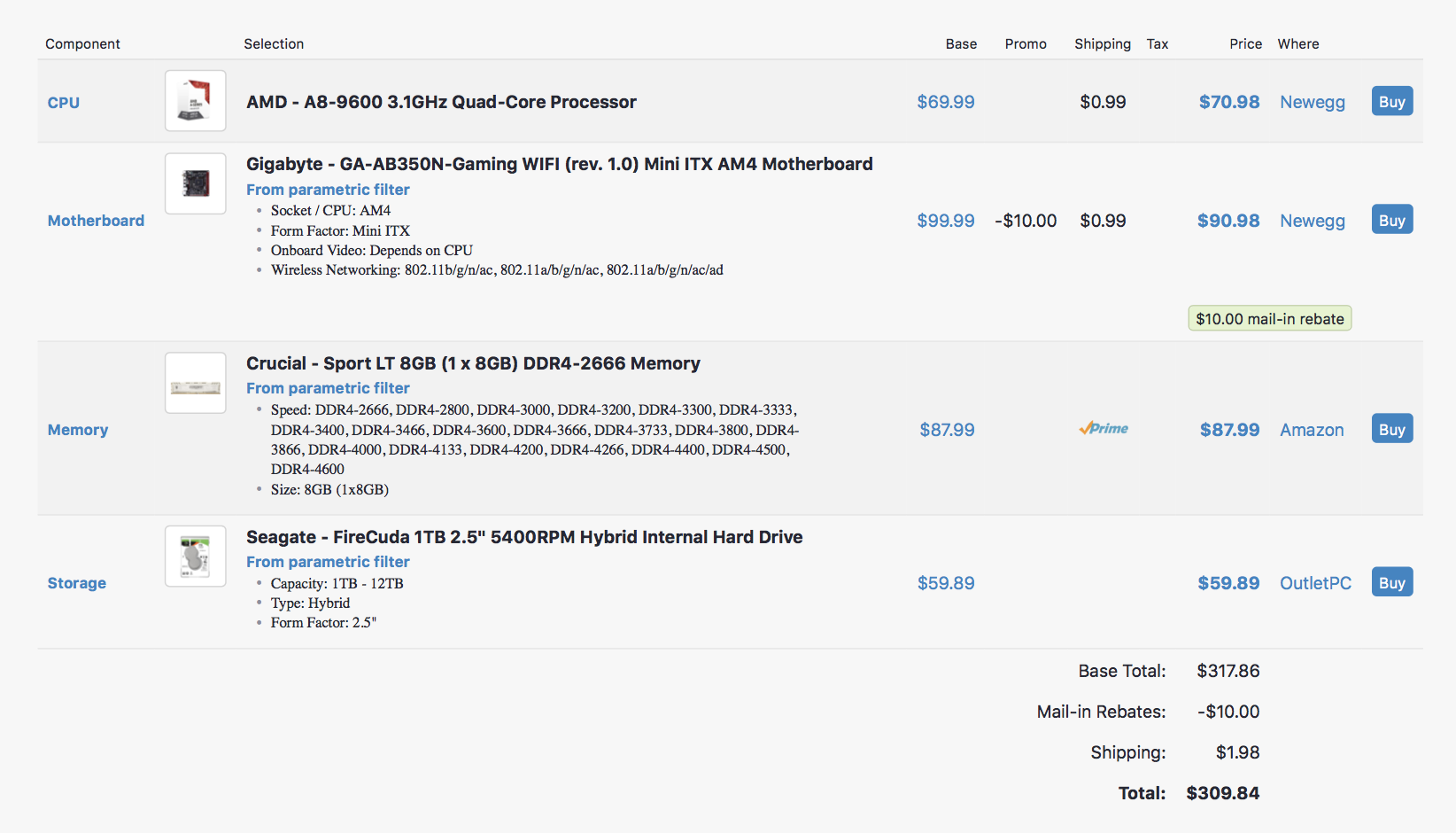 A "game-now" system using used components to maximize performance on a budget.

Okay, there's no neat PCPartPicker list for this, but that's what happens with used components.

Alternatively, if you've having difficulty finding that motherboard...

And if you're still having trouble...

The savings aren't as much with mITX systems as full towers, but it's still a good chunk of change for significantly better performance.

I'm too tired to go into this in too much depth–and I think it might warrant its own question–but the Roccat Sova MK for M/KB, and a PS4/Xbox One controller if you want a controller.

I think that's about it! I hope this helped, and I'll be happy to answer any questions you have.

Not the answer you're looking for? Browse other questions tagged mini-pc or ask your own question.