A few questions about my PC build [closed]

Ask Question
Asked 4 years ago
Active 4 years ago
Viewed 73 times
0
Closed. This question is off-topic. It is not currently accepting answers.

I am trying to build a PC for high-res video editing (2K and a bit of 4K with Premiere Pro), audio manipulation, general use, and a touch of gaming. I want it to look cool, but not sacrifice money or performance for looks. I have done some research and found some parts that I might use, but I need advice to continue. I will probably not overclock my PC.

I made a part list on PCPartPicker, which is here.

The rest of my answer is predicated on the assumption that you basically want the cost to remain around the same point, as well as performance. See the body for more details. 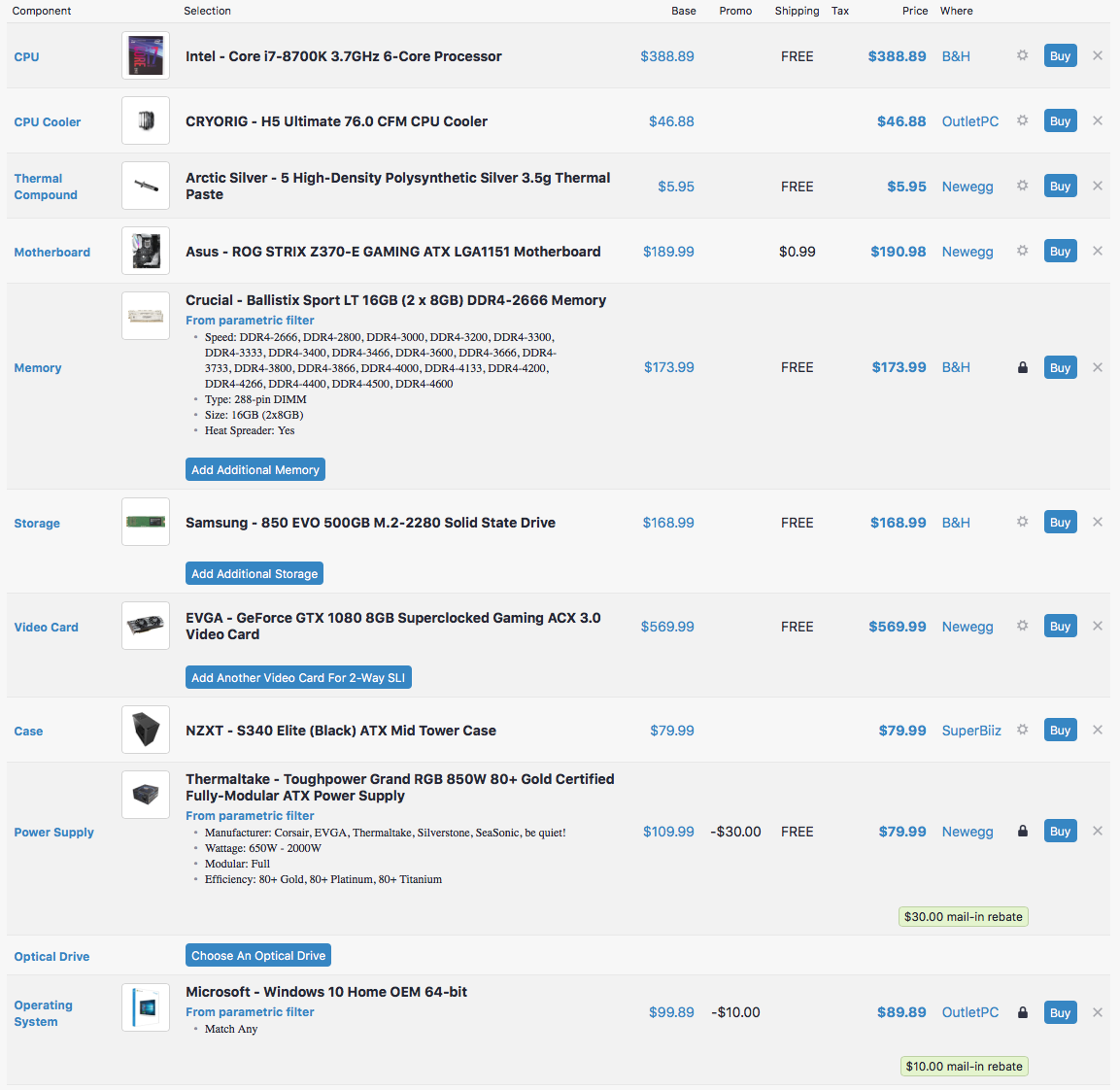 Though personally I would advocate for a switch either to the 8600K or a Ryzen 7 1700 (or lower) to save cash, these create fundamentally different systems. The 8600K drops HT–most workloads will stay the same, including gaming, but a few won't do quite as well; the Ryzen 7 1700 has significantly lower single core performance and won't do quite as well in games and other mostly single threaded workloads, but has two additional cores for multithreaded workloads, has SMT, and costs significantly less. As such, I've maintained the 8700K to keep the caliber the same, as well as the strengths.

Same. IMO it's a great cooler, especially for the price, with clean looks to boot.

Though there is compound included in the box, it's cheap silicone stuff. It's unlikely to really hurt performance in any meaningful way, but given the caliber of build you're building, a little Arctic Silver can't hurt. Plus, more thermal compound is always fun!

Probably the largest switch here. The main reason I made this switch was to integrate the wireless solution into the motherboard. This cleans up aesthetics and leaves I/O open, and gets you either (depending on the board) a much cheaper build or a much nicer board.

I picked the Asus ROG STRIX Z370-E Gaming board over two cheaper boards: the Gigabyte Z370 Aorus Gaming Wi-Fi and the ASRock Z370 Killer SLI/ac. The primary purpose here is looks: IMO, the RGB lighting, I/O cover, M.2 cover, and multiple RGB headers make this a flexible, good looking board. You also get better power delivery and some minor features in the BIOS, but these are largely secondary. If you think the fairly steep $80 price increase isn't worth it, I'd recommend the ASRock Z370 Killer SLI/ac; I've had some very poor experiences with Gigabyte support in the past and (though their products are fine in themselves) I prefer to stay away from them when possible.

The change here is fairly minor, but I gave a little more flex in RAM speed in return for a slightly cheaper price. The return on investment for higher speed memory isn't worth the money for the most part above 2666 MHz on Z370.

I picked the much faster (roughly 40%) and only slightly more expensive Samsung 850 EVO M.2 over the WD Blue M.2. It's green, which is a bit of a bummer, but if you go with a motherboard with an M.2 cover, you won't be able to see it anyways. Neither of these drives are what I'd describe as particularly fast though, and even fast SATA SSDs will beat them. If you're willing to sacrifice a little bit of cleanliness, I might recommend the slightly cheaper and faster Samsung 850 EVO-Series 500GB 2.5", along with maybe an HDD for mass storage.

As much as I'm a fan of the Founder Edition look, it just doesn't make much sense outside of a small form factor case or water cooling. FE cards run hot, and the EVGA Superclocked model is barely any more expensive and should perform better while running cooler and quieter.

Depending on what resolution and framerate you're targeting in what games, a GTX 1080 may be rather overkill. If you can give me more info on those, that'd be great.

You're spending a lot of money, I'd treat myself to the improved S340 Elite. It's got a larger glass side panel than the original. That's the main thing.

Not that your PSU was a bad choice, just that a similar power supply with a slightly higher wattage could be had for a little cheaper. To be fair, the RM650x is a slightly better power supply than the Toughpower Grand aside from that. Really, anything that fits the parametric filter should be fine; pick a power supply as you deem appropriate from there.

No changes really. There are other ways to get cheap keys, but I won't go into those since they're a bit of a grey area.

If you're doing anything super intensive editing wise I'd go for a quadro, but if you're just splicing clips, making wedding vids and the like a 1070/1080 will do you fine. I think you'll benefit more from single core performance in this build. Go for intel.

One thing to consider are accessories like the palette gear if you do a lot of editing on a regular basis.

Not the answer you're looking for? Browse other questions tagged graphics-cards motherboard pc processor or ask your own question.

5
PC Desktop build for Blender 3d around $3000 USD
3
PC upgrade for the next few years
3
PC build for Robotics, Machine Learning and CyberSecurity
1
Questions I have about my custom high-end water cooled PC before I buy