My Dell XPS laptop is very nice, but the keyboard and its trackpad are less than ideal for a full day's work, or a quick gaming session. I'm looking for a keyboard I can put in my bag with my laptop.

I have a Corsair K70 gaming keyboard with Cherry MX red switches for my desktop PC, and I love it. Basically I wish I could buy a more compact (e.g. no numpad), non LED lighted, wireless version of that. Perhaps that helps in recommending something?

This doesn't hit all of your checkboxes, but I like it quite a bit so I'll throw in a recommendation for an Anne Pro mechanical keyboard. I picked one up a few weeks ago because the robber dome boards at work were hurting my fingers. It's a pretty great board, but I'll go through your concerns so you have a decent rundown. For background, I've also got a K70 at home (cherry browns) and I went with cherry reds on my Anne.

Stuff you should know:

They've got a subreddit with guides for everything to do with this keyboard if you decide to get it. Firmware update and app installation (needed for the custom preset, I haven't done it yet that's happening this week) are a bit of a pain from the looks of things, but not too bad. There is no physical power switch. The company says you can just disable bluetooth and RGB and that will put the board into a kind of sleep mode, but you'll notice on that sub that a lot of people install physical switches to kill power and avoid accidental key presses while carrying the keyboard in a bag and having it connected to a mobile device like your phone. The mod looks easy and I'll probably end up doing it myself, most people say it takes less than an hour.

It's not a perfect board but I'm liking it an awful lot. Amazon has the red switches version in stock here: https://www.amazon.com/Mechanical-Pro-Bluetooth-Backlight-Smartphone/dp/B06XW87X9D/ref=sr_1_5?ie=UTF8&qid=1498494412&sr=8-5&keywords=anne+pro+keyboard

Feel free to ask any questions if I missed anything.

EDIT: Just going to throw in a quick mention for CODE boards, as those are also highly rated and very popular for programming. They were the primary competition to the Anne Pro among keyboards I was looking at, and while I ended up not going with them they're a respectable company and may have something closer to the form factor that you're looking for, if that's an important enough concern for you.

The other answer was very helpful, and it opened up a whole set of options I didn't know about. Unfortunately most options are keyboards that are either custom made or have to be ordered internationally. This would mean a lot less favorable return conditions (if at all) should I not be satisfied. So I looked for something I could get in my own country first, where you can almost always return stuff within 2 weeks for a full refund.

So that's for context, and the reason I ended up skipping on the Anne Pro, CODE and WASD, the Varmilo VB87M (which is kinda similar to what I end up recommending), and several others.

I've now bought and am very happy with my CM Storm QuickFire TK (Red), and I would recommend it to others with requirements similar to those in the question. Here's how it stacks up against the requirements:

It actually has a mixed 10-key-pad and cursor keys with Home/etc keys, and the NUMLK key determines which of the two it uses.

Basically it's the more compact Corsair K70 I said I was looking for, as you can see in this photo: 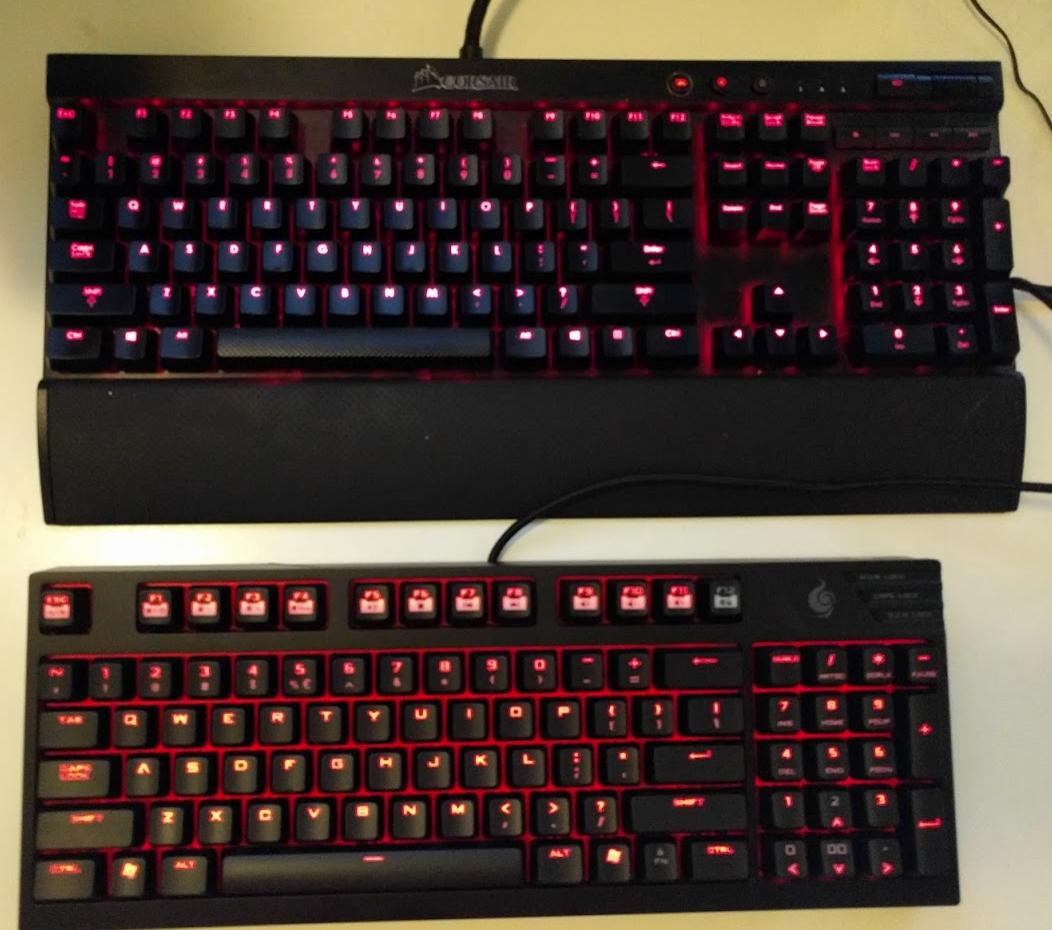 Afterthought after a few months

Now, a few months after having bought the CM keyboard, I will mention that' I'd still recommend it for my mentioned situation. However, to mention some downsides that I did notice after a few months of usage:

Again though, I'd still recommend it.

4
external keyboard with narrow (no number pad) laptop-style layout? trackpad is a bonus
32
Flat keyboard with the shortest travel distance and lowest actuation force possible
4
Programming/gaming mechanical keyboard with large enter key + backlight
3
How do the razer key switches compare to cherry mx?
6
Does Such Mechanical Keyboards Exist?
4
A good mechanical keyboard for professional programing on Mac
2
Is there any notebook with ACTUAL full-size keyboard, exact same layout as desktop keyboard?
0
Looking for a specific nomad multipurpose keyboard