I had an old PC (the build was originally a Siemens Celsius 460 workstation) whose case I wanted to strip apart and supply with newer components. For most components (those with standardised sizes, i.e. hard drive, optical drive, mainboard) this was easy but I ran into an unexpected problem when wanting to install the new power supply unit.

The previously installed unit — an Astec AA21720 — was screwed into a metal in-between casing thing[1] and then onto the back of the case. The new unit — a Corsair VS350 — has its screwholes in different locations (what I presume is today’s standard locations). It’s not physically possible to fasten the new PSU with the screws and the in-between thing-a-ma-jig[1] provided and it’s not really possible to screw it in without it. But, the new PSU, while being wider than the old one (15 cm versus 12.5 cm) is still slimmer than the width of the case (approx. 18 cm). This leads me to believe that I haven’t lost yet. But let me show you some pictures first, so we know what we are talking about: 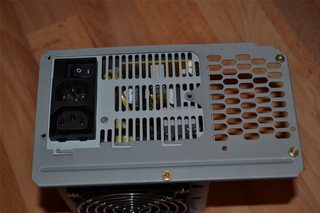 The old PSU with the thing-a-ma-jig[1] to screw into the back of the chassis. 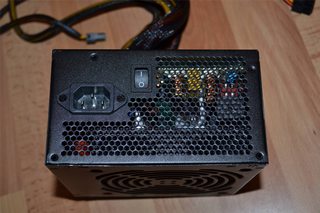 The new PSU as is. But with the screw locations visible. 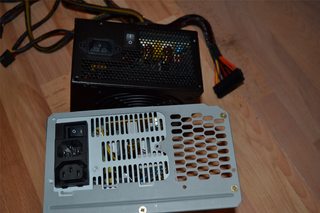 And these are both to compare them with each other.

Are there any positioning-adapter thing-a-ma-jigsies[2] that I could buy and put between the new PSU and the back side of the case, so that all screws can fit into holes made for them? Sort of like the thing-a-ma-jig[1] the old PSU has, which basically allows to screw that one into chassis screw holes which are somewhere completely different. (If I could, I would buy the lowest-end cheap stuff because I don’t give a damn about most of the cool things that a case can do, so assume the bottom end of the price scale for standard PC cases.)

Find out what form factor the original PSU is, then buy a PSU Adapter Plate which will adapt whatever that form factor is to standard ATX. Then attach that plate to your new PSU, and then bolt the other form factor edge to the darker gray object (object [1] in your nomenclature). Should work, though you might have to get creative with fasteners (you might need flat head bolts).

Not the answer you're looking for? Browse other questions tagged power-supply case or ask your own question.

9
A new case for an old build
3
Best case for z170A M7 and Corsair Hydro H100i V2
5
Older model vs new model PSU
0
What PSU Should I Get For A Mini-ITX Board
3
Desktop case that allows powering up only one of two HDDs/SSDs
2
Which PSU for an ASRock Z170 EXTREME 7+ motherboard with many hard drives?
0
ATX case with far holes for 3.5' HDD
3
Consumer/gaming-oriented case with high-end "big iron" server-level build quality