With the new graphics card generation our PCs should be prepared for 4k gaming with HDR.

But what about monitors? Are there any available that you can recommend? I've been searching and couldn't find a single one that explicitly supports HDR and has Display Port 1.4.

Additional question if it's not off-topic: What are the features I have to look for that indicate that a monitor supports 4k HDR? Maybe I've just been searching under the wrong assumptions.

HDR has been around for a while now but the technology is still in its infancy. You will see HDR TV's, but monitors are much harder to come by. Also, there is relatively little HDR content. It's going to be a rough transition, as sRGB is the standard, and until the conversion is made simple, or a shift is made to start producing content in this format, you won't see much in HDR.

That bit in italics is more of an opinion. But anyway, here are the facts.

Right now you can find 4K monitors, but they do not support the wide color gamut which HDR allows. You will not see HDR in monitors until later next year at the earliest is my guess based on what we've seen so far. AMD is still busy showing off the tech, and its going to take some serious paradigm shifting for everything to support HDR. It's a whole new playing field in a sense, and EVERYTHING (your OS, the way content is produced, the way your games are created) will have to make the shift to HDR.

The long and short of it, you're going to have to wait until at least 2017 to see 4K HDR Monitors at the consumer level (you can buy the TV's now), and you're going to be waiting even longer for content that properly utilizes HDR technology.

Be realistic with this emerging technology

For the most part, few people can tell the difference between the 65,536 colors of 16-bit RGB color and the 16,777,216 colors of 24-bit color, let alone the more than one billion colors of HDR. The human eye can distinguish only eight million colors. As an experiment, make a quick app or a web page with two adjacent squares on it. Make one square the color #4747E7 and the other box #4747E8. Then ask ten people if they are the same color. Do the same experiment with two squares that are one pixel in height. You begin to see the non-essential nature of 10-bit color channels.

Just in case you want to see for yourself, paste this code into notepad, name it box_demo.htm, and then run it

HDR, obviously, stands for High Dynamic Range. Dividing each RGB color channel into 1024 gradients instead of merely 256 by itself does not automatically extend dynamic range.

Already, quality IPS monitors are delivering million-to-one and higher contrast ratios. 40"-60" 4K televisions from Samsung, LG, Sony, NEC exhibit breathtaking detail and dynamic range and double as very passable PC monitors. While HDR is an evolutionary step forward, how valuable is it in actual use? At this point in time, hi-fidelity enthusiasts would undoubtedly find greater gains by optimizing existing 32-bit technology than by obsessing over the questionable performance gains of so-called HDR. If you pay attention to product specifications, you will see that many monitors already support "1.07 billion colors" without explicitly claiming HDR optimization.

A fact that some younger techs and readers fail to appreciate is that many of us grew up in an era in which 800x600@256 color was passable. 1024x768@65K color was preferred, and 1280x1024@16.7M color was the ideal to which we aspired. There is no practical difference between 24-bit RGB color and 32-bit RGB color. But, starting with Windows Vista, Microsoft changed the default desktop Windows Presentation Foundation rendering engine from DirectDraw (2D) to DirectX (3D) which natively supports 32-bit RGBA color, the "A" standing for alpha, or transparency. This was a significant and important technological implementation that has allowed native 3D desktop effects and semitransparent window and fade effects.

Don't get me wrong, I am wholly in favor of the global adoption of a 10-bit byte. 1024 makes a whole lot more sense to me than 256. Having a 40-bit dword rather than a 32-bit dword allows for a trillion values rather than merely 4.3 billion. But until that happens the 30-bit HDR color schema will be more of a marketing ploy than a viable and useful technology upgrade. Your money would be better-spent by upgrading to a monitor with a practical and proven technology like nVida's G-Synch or ATI/AMD's FreeSynch (as noted by NZKshatriya below.)

Who among us would not drool over this non-HDR 28" 4K LG monitor!! 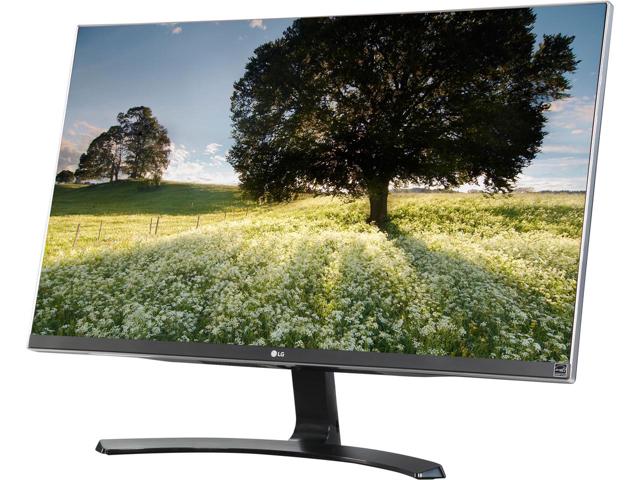 Finally LG will introduce the 32UD99 at CES 2017. LG states that it will fully support teh HDR10 standard. It also has 4K so it seems to meet the requirements of my question.

I'm still leaving the answer of INV3NT3D as accepted for now because full specification isn't out yet. Also now one knows if it'll be recommendable.