Several unresolved questions have been made in various online forums looking for any options that may exist for a USB to Ethernet adapter that supports multiple VLANs.

Past questions have often been sidetracked due to confusion as to what is being asked for. The requirement here involves advanced Ethernet networking and the 802.1q standard / VLAN trunking - something that is typically not used in home or small-office networking. This is something that would be more suited to the enterprise, or possibly someone working towards a networking certification.

The intent for this question is to act as a central source, and which can hopefully be cross-linked to with all other related posts. Once a suitable solution is found or developed, an answer posted here will hopefully benefit everyone.

(Anyone please feel free to edit and add additional links as they are discovered.)

Unfortunately, there are 2 issues here:

It seems that what we are looking for here is a bugger to search by - as even "802.1q" and "VLAN" aren't even good enough search terms. (We not only need "tagging", but also "trunking".)

(An attempt is being made to write this question in 3rd-person, assuming that it may become Community Wiki. Please feel free to edit and contribute!)

No known USB-to-Ethernet adapters that provide a Windows driver with multiple VLAN support. 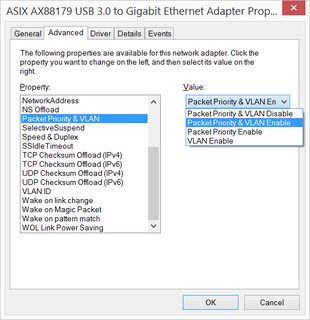 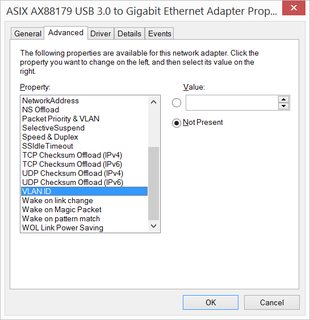 What is missing is any sort of trunking support / virtual miniport driver - such as the additional capabilities provided by the full driver installs of the Intel Advanced Networking Suite (iANS), the Broadcom Advanced Server Program (BASP), or the Realtek Teaming or Realtek Ethernet Diagnostic Utility.

The difference is, we could configure a switch port to provide access to multiple VLANs, and configure this adapter to choose which VLAN to be a part of - from the client device, not the switch. Or we could add another unmanaged switch with access to the multiple VLANs, then use multiple of these or similar adapters - configuring each one to be on a different VLAN. Something like this (link broken, but still available through the Internet Archive - please update if anyone can find a relocated copy): With proper trunking support, however - everything could be done with one switch port, one wire, and one adapter - very efficient, convenient, and economical.

As @Flexo had noted, full 802.1 support is practically guaranteed to be available under Linux as long as the adapter works, as Linux provides all of the VLAN support by itself as standard feature of the kernel. Windows, however, doesn't provide these services itself, and depends upon a vendor-provided driver package (e.g. iANS or BASP) to provide them instead.

One example from @ziesemer:

I have the full capabilities on an aging (Dell Latitude E6500) laptop, compliments of the Intel chipset (82567LM) and driver (very similar to @bwilliot). I would be very anxious to find a current replacement for this functionality as well - especially for usage with devices like the Microsoft Surface Pro 3 or 4. (The Ethernet controllers provided on the Surface Pro 3 or 4 docking stations are no better than the ASIX AX88179 - I checked. It is also internally connected off of the USB, so I guess I shouldn't be too surprised.)

Now, using the Virtual Switch Manager in Hyper-V might be a way to support this under Windows 10 (similar to the above link) - but requires a new enough CPU to support the Hyper-V hypervisor. Additionally, running Hyper-V at the same time as VMware or VirtualBox is not supported, and doesn't currently work.

One ugly work-around from @ziesemer:

Was looking at this also, found a USB NIC from Cypress, http://www.cypress.com/products/ez-usb-gx3-superspeed-usb-30-gigabit-ethernet-controller . In the datasheet it says

So assuming there is a dongle using this chip and that the drivers makes it possible to configure the vlan id to filter out, looks like it should work.

Not the answer you're looking for? Browse other questions tagged usb networking windows ethernet network-adapter or ask your own question.