SSD to work with PCIe

I recently got a new (to me) computer. It was a workhorse computer from a few years ago. I'm trying to rig it up to work with an SSD in its new life with me.

Currently the motherboard has SATA II and PCIe x4 slots available. I purchased a SAMSUNG 850 EVO M.2 SATA III drive which I was hoping would wrok but because of my confusion on how the M.2 spec works the drive I purchased is not directly compatible with my motherboard. I was assuming I could plug it into a PCIe slot (obviously that was wrong), then I was hoping I could get a PCIe to M.2 adapter but because this particular drive is M.2/SATA which means if I get an adapter I'd have to plug it in to a SATA II port which is what I was hoping to avoid is the first place.

Is there something I can buy that can make use of the drive I purchased while not compromising speed?

After checking specification of your motherboard (from this link) I checked that you have one PCI-E connector which will support PCI-E Solid State Drive.

You have two possible solutions:

I would reccommend to buy Addonics adapter it is cheaper and has good reviews.

If you will mount only one SSD you won't need additional power and sata cable (screen below): 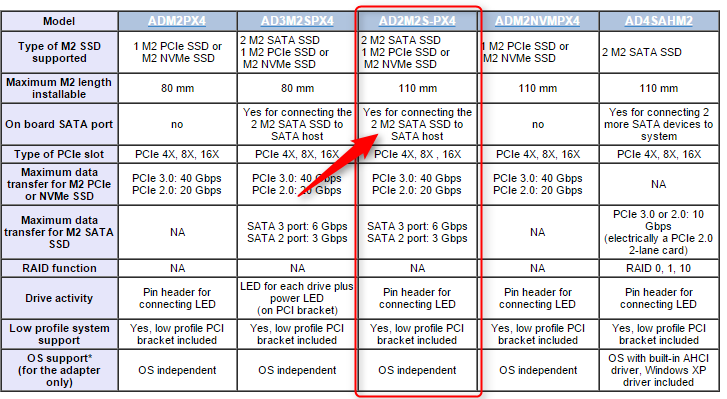 Digging deeper I found two other Addonics adapters which have slot for only one SSD drive and no additional connectors (but only one can fit your SSD, because second one can only fit up to 80 mm M2 cards):

Not the answer you're looking for? Browse other questions tagged ssd pcie sata or ask your own question.