I'm in the market for a new gaming laptop. Because you can't easily upgrade the components in laptops, I'd ideally like to buy one that has the potential to run VR. However, my day to day needs do not demand that much GPU power, so I'd like to buy the minimum hardware spec I can get away with.

I know I could wait until the headsets come out and a new generation of GPUs is around to support them, but I'd prefer to make the purchase now if possible, as it'll save me a bit of tax.

So I've done a bit of research and my understanding is that Oculus are suggesting desktop grade GTX970 is the minimum. That would suggest that a 980M ought, in practice, to be able to support an Oculus Rift. However, I believe I'm right in saying that the 980M is still integrated rather than a separate board, and that it uses Nvidia Optimus. To be frank, I don't entirely understand what this is, nor why it's a problem for VR.

I also know that there's a new desktop grade 980 out, suitable for laptops. This is expensive and doesn't have wide distribution. I also don't know whether this is board mounted/uses optimus or not. I also don't know if it's G-Sync enabled, as this seems to be a good idea for VR.

I was originally looking at the Asus ROG G752VT as it seems to offer excellent value for money. But it's got a 970M, which I suspect isn't going to be enough and is going to run into the optimus problem.

So the baseline question is: what's the mininum specification I need to get a laptop-ready VR.

Bonus points if you'd be kind enough to break this down into:

If you want a VR ready notebook it has to have Nvidia GeForce GTX980, so it will be a top end notebook. Asus ROG G752VT isn't VR Ready because it has a GTX970M which does not support VR. 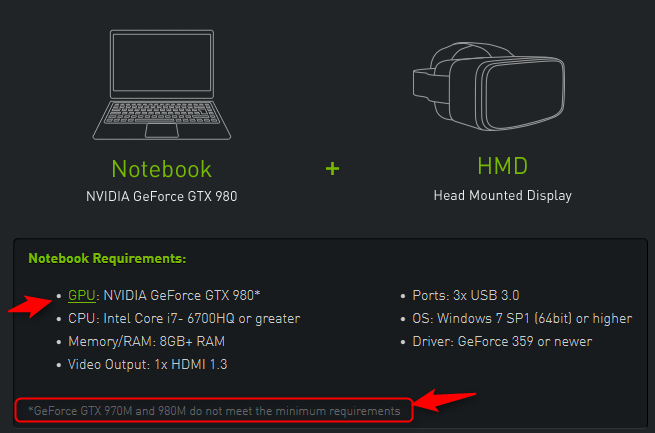 I would choose one of the MSI top end notebooks which cost around $3000 (both are VR Ready).

Nvidia Optimus is a technology that allows automatic switching between the Nvidia GPU and the integrated GPU. This allows less power to be used when less GPU intensive programs are used. This is not a factor that effects VR.

While Peter has explained why Nvidia Optimus is a problem and ivaan has proved that even a 980M won't work. If the laptops, MSI GT Series GT72S DomPro4K-059 and MSI GT Series GT72S DomProG-070 are too expensive. I would suggest going with a Razer Blade Stealth with Razer Core or Alienware 13 with a graphics amplifier. They will allow you to keep your price low while being VR compatible in a flexible way.

Not the answer you're looking for? Browse other questions tagged laptop graphics-cards vr-headset or ask your own question.

4
Looking for a laptop to learn game development on the go
4
Gaming laptops: Asus ROG G752VT vs Medion Erazer X7843
5
New work laptop for firmware development
0
GTX 980M 8GB vs GTX 1070 8GB for a new gaming/workstation laptop?
0
Quadro M2200 vs GTX 1080 Workstation Laptop for AutoCAD and 3DS Maya?
0
Laptop for Linux and I have a tight budget