The HP EliteBook 820 G3 manual states that either a hard drive or a SSD might be installed (page 36). And not both at the same time. Thus, as-is, one can't install two SSD modules in that machine.

The reason: apparently, the SSD connector is right there where the (SSD) SATA disk drive would be placed.

I guess, if one really wants to install a 2nd SSD (in addition to the SSD that occupies the mSATA slot, cf. page 39) one could try following options:

For both options, I need hardware recommendations.

And perhaps some details, e.g. how the WWAN slot is actually called (mini PCIe?), what modules are compatible (mSata?) and how slim a module would have to be.

Preferably, the SSD module should come from Intel or be of comparable quality.

Here is a combination of the drawings from page 36 and 39 of the manual showing the same drive bay for better visualization of the problem: 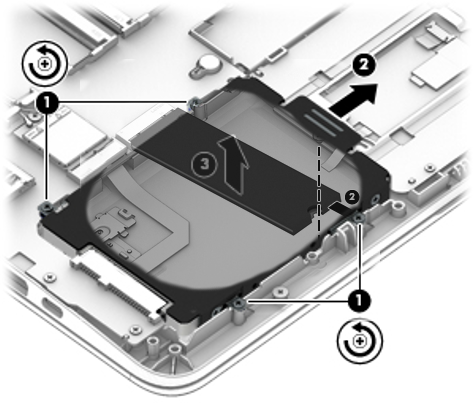 Edit: After understanding that the mSATA port will block the HDD drive bay I would suggest a Dual mSATA HDD adapter. Feedback is appreciated from anyone who is actively using such a setup as a boot drive on any OS.

Edit 2016-04-17: I hoped that Skylake equipped business laptops (HP, Lenovo, Dell…) would offer plenty of M.2 slots for SATA or NVMe storage, but the mobile chipsets don't offer as many PCIe lanes as the main or performance class desktop versions, which made some manufacturers come up with unexpected designs and decisions against a 2nd storage port or slot. Another example: Lenovo removed the small M.2 slot from the previous generation (T550) in favor of a combined 2.5 inch port where you can either install a SATA drive or a U.2 NVMe drive.

This is explained just a few pages below (p. 39) in the manual, it's an mSATA port. mSATA to SATA adapters exist, but are not suited for use in laptops. mSATA is replaced by NVMe in newer product generations, which achieves higher speeds by avoiding the SATA layer.

Here is list of recent mSATA SSDs for Europe/UK with capacities starting from 120 GB. I currently have a Samsung 840 EVO 120 GB which works fine so far, but there may be options that suit your needs better. Once you nailed down the features you want, look if the products are available in your country and for which price.

Guessing by your name you probably want to use the German version of the site for Austria and Germany.

Edit: the following video: https://www.youtube.com/watch?v=dF9gqAtM2U4 shows the installation of a second SSD in this model showing that it is possible.

Not the answer you're looking for? Browse other questions tagged laptop ssd sata or ask your own question.

2
SSD to work with PCIe
0
M2 drive for Xiaomi air 13.3
0
What SSDs (NVMe + SATA) to a high-performance laptop
0
Does my laptop support M.2 SATA SSD?
0
What are the best(for me) SSDs to install in Dell G5 5590?
0
Does Using both SSD & SATA Hard drive impacts Laptop Performance?