It's the second time I read a praise or speculation about how Lightning-connected headphones will improve "audiophile" experience, this time in English:

Apple's Lightning connector — standard across modern iPods, iPhones, and iPads — could be the catalyst for a dramatic change. There are already Lightning headphones from Philips and Audeze, whose advantage over conventional wired cans is in sending a digital signal to an integrated amp and converter inside the headphones.

Basically if A2DP is transparent for you why would you replace it with a standard cable or even a proprietary one?

Another question named 3.5mm Analog Audio vs. Bluetooth Audio Quality has been perfectly answered on SuperUser.

Lightning cables as a DAC/Amp

While I'm not an Apple customer, I believe that Apple could bring a change to the market, however till now it looks as constructed as the rumors about an Apple smart TV and not like solution that Apple (or some other company with another connector) intends to promote actively.

The headphones mentioned are the Philips Fidelio M2L (based on the inexpensive Fidelio M1 series) and the AMP/DAC/DSP Apple Lightning cable¹ for the Audeze EL-8 which has been offered with the closed back version in a titanium-colored variant for a few weeks. The M2L looks like it has no replaceable cable, here is a comparison with the M1BTBL: 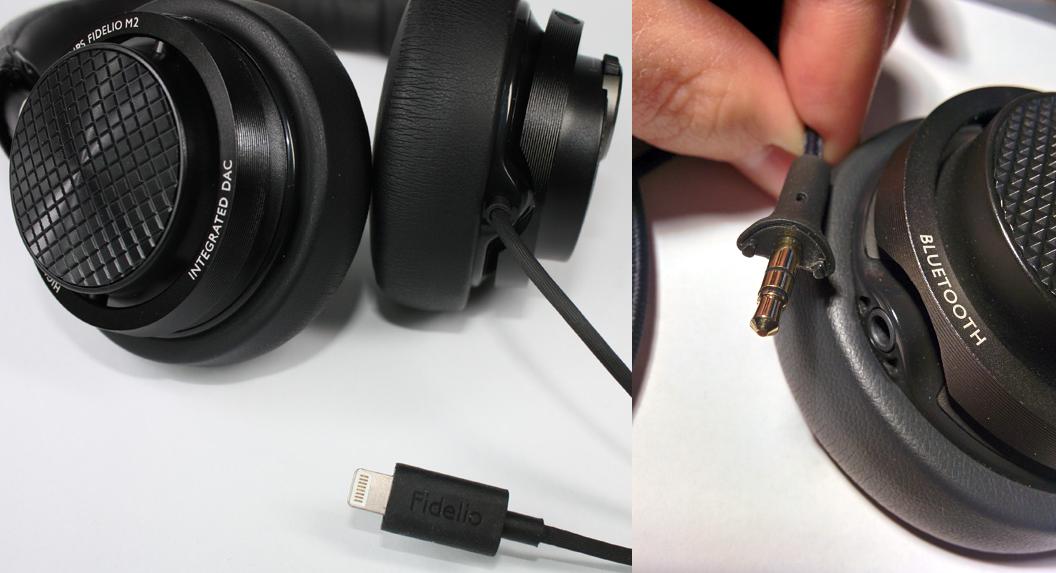 Integrating the DAC into the M2L cable (or similar products) and putting a 3.5mm plug on the other end would be possible and great for compatibility² but increase the price of DAC replacement cables (you probably get a new Fidelio M1 for the price) and generate questions from customers who have unfounded doubts about the 3.5mm plug.³ Proprietary connectors on the headphones themselves are accepted for products in higher price ranges and ensure compatibility with a variety of jacks on different devices, but mainstream product designs seem to be increasingly optimized for incompatibility and obsolescence.⁴

Products that rely on only one connector type that isn't 3.5mm TRS/TRRS appear to be very short lived to me. You may find adapters, but that wouldn't be very practical. The 3.5mm jacks and plugs are very durable and have been around for a long time, Microsoft even moved from 2.5mm to standard 3.5mm TRRS with their Xbox One and Sony has them on their PS4 too. The missing headphone jack on the HTC Dream was probably the biggest anti-feature. I'd rather recommend Bluetooth headphones with an optional 3.5mm analog jack, this way you get an integrated DAC and flexibility.

There's more to consider: Your next primary or personal communication device may not even have a Lightning-port or USB-port at all and connects completely wireless. If the size of the 3.5mm plug actually becomes an issue for designing new ground breaking products then no physical connector would be the answer and we're almost there with smartwatches.

When you encounter this or a similar topic check who promotes what.

Someone reviewing consumer hardware with a favor for a different connector for audio is not objective. It's also inconsistent and appears to be overexcited when there was nothing to complain about 3.5mm plugs or Bluetooth with aptX in the ecosystem (Apple) before.

You may find that the Lightning or whatever version doesn't sound significantly better than the Bluetooth version or better at all. Save the money for a product in the next tier or for something completely different.

It doesn't matter if you prefer bass, mids or highs. If you prefer not carrying an additional device with you, that's fine too but has limitations.⁵ In any case get the most objective or reasonable playback device or sound source and the headphones with sound signatures you prefer for your music, then do your ABX listening tests. You will be confident with the decision you made and that should matter the most to you.

Not the answer you're looking for? Browse other questions tagged audio headphones or ask your own question.