My current system is:

I am looking for a graphics card for my system. I will use my PC mainly for programming, but I also do some video editing using Sony Vegas Pro. I need a GPU that is:

Has anybody got any good recommendations for a GPU that is suitable for my usage?

Sony Vega Pro's hardware acceleration uses OpenCL compute. Generally, the consumer cards have similar performance for quite a bit cheaper, as seen in the benchmark below. 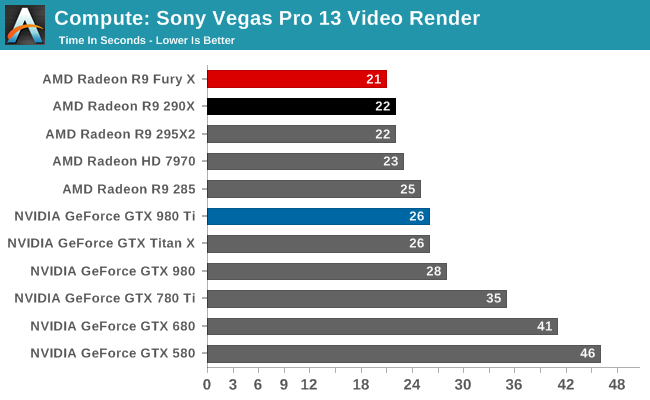 I recommend the XFX R7 370 2GB Double Dissipation Video Card (R7-370P-2255), currently priced $124.99 + $3.99 shipping at newegg.com, due to the fact that it has more than 3 times the stream processors running at a higher clockspeed, and that it uses GDDR5 rather than DDR3, which makes it quite a bit faster for Sony Vegas Pro, and for other applications, than the similarly priced W2100 and K420 workstation GPUs.

Professional video cards are the best for your work load as they will be optimized for things such as video editing.

From Nvidia, there is the Quadro K420. From AMD there is the FirePro W2100. Both cards will be able to work with the GPU render acceleration in Vegas and both support use of 2+ monitors through DisplayPort, or adapters to convert the DisplayPort to other connectors. The K420 also provides native DVI-D with a cable that has two ports on it.

The W2100 has 320 cores, while the K420 has 192. These cores are an integral part of the performance of the GPU because they are what GPU accelerated processes use to perform tasks. The W2100 also has twice the VRAM, which allows more data to be stored on the card while it is processing, which prevents the need to constantly pass data over the PCIe bus. Speaking of which, the K420 has ever so slightly higher memory bandwidth (29GBps vs. 28.8GBps), but this difference is negligible. The W2100 also uses PCIe 3.0, whereas the K420 uses PCIe 2.0. This means the W2100 is capable of passing data over the PCIe bus faster than the K420.

All in all, the W2100 is a better card at the price point, however if you have a preference for Nvidia cards, or want native DVI-D, the K420 may be a better choice for you.

Not the answer you're looking for? Browse other questions tagged graphics-cards desktop or ask your own question.