I've bought a Rode NT-USB Mini condenser microphone and am really happy with it. As expected the supplied "magnetic" stand transfers a lot of "bumps" from my desk and cherry mx red keyboard bottom-outs. I will likely mount the mic on a boom arm, but still would like a good shock mount for this Rode NT USB Mini with these requirements:

In addition of course to the more subjective but most important "it absorbs stuff" ("it works!") requirement. Just not sure how to make that a good must-have requirement...

I've done a bunch of things to research, including:

So, bottom line: what shock mount would you recommend for the Rode NT USB Mini condenser mic?

Hard to tell from Røde's site whether the mic dimensions are with or without that little U-shaped mount.

If it's with, then you might have some luck buying an entire cheapo mic kit & using the shock-mount from it.

This Neewer NW-700 [& a myriad variants under different names] can be bought for even less than the price of a separate shock-mount. The mic itself leaves a lot to be desired, unsurprisingly, but the shock mount might be worth a look. 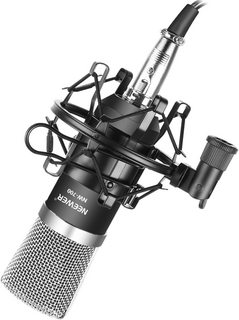 It closes to a circular, slightly padded 50mm mic grip - with not a lot of leeway unless you want to try bending it a bit yourself.

As good shock-mounts are balanced in tension against the weight of the mic, I doubt it's going to be perfect - but then again a shock mount for my Neumann U87 is £250 so you get what you pay for ;-)
The Neewer weighs 230g, but the shock-mount actually feels a bit firm for that weight, so the 500g or so of the Røde might be OK in it, if it fits. It doesn't have much give in it, but it's not as flimsy as you might imagine. You could always re-elastic it for a few pence from a haberdashery if you wanted to change the tension.

BTW, I have one of these myself, just because there are a million questions about them on Stack Exchange & other forums, so I thought it was worth the 12 quid I paid for it to know how to answer questions on it. Mine calls itself a Floureon BM-800 but these things seem to be pretty much all the same, just with different badges & slight external cosmetic differences.

Late edit
I recently squeezed my Neuman into the cheapo shock mount… ermm… not really successful. The mount was still rather stiff even with all that weight in it & sang like a bird if you tapped the stand, actually managing somehow to transmit more ring than in Neumann's non-shock-mount mic holder.
I couldn't recommend it - even if it is £240 cheaper than the Neumann shock mount.

It might be worth experimenting with some looser elastic from a haberdashery store, but I didn't go that far.

25
Good, cheap microphone for speech / voice recording?
6
What's a good USB microphone for recording instruments?
4
Bluetooth microphone for interviewing people
2
Wireless Microphone with USB Receiver that works with Macs
1
Looking for a simple wireless headset with microphone
2
Are there any truly wireless earbuds that support A2DP while using the microphone?