What's the cheapest reliable method of backing up my data?

In the event of a catastrophe, it's always good to have a backup of your data. I'm looking for a good hardware solution (i.e. not a cloud or other online-type backup—a physical backup that I can keep with me) that's not too expensive.

I have approximately 12GB of data that I'd like to keep backed up (probably ~20–30GB max). I'd like to make backups no less often than about once every 10 days or so, and I don't really care about keeping 3- to 4-month old backups around.

An ideal solution would have the following properties:

What's the best backup drive / other backup solution I can get with these criteria? Since I'm pretty clueless about these types of things (which is why I've decided I should probably start making backups soon, as in yesterday), what other thing should I be looking for in a backup drive as well?

Ballparking from your backup plan (12 GB working set, weekly backups, retention of three months), and assuming full backups rather than incremental backups, you need about 150 GB of storage, rather than the 1 TB you specify.

At this scale, you're looking for an external USB hard drive or solid-state drive. None of these is exceptionally reliable (five-year failure rates vary between 1% and 100%, depending on brand, batch, and luck), so standard practice is to use two of them. For protection against bad batches, I'd recommend getting different brands for your two drives.

I'm not recommending any particular brand, simply because predicting which ones are reliable or not is a fool's errand. Avoid drives with special "one-touch backup" or similar features (they're just another possible point of failure). Select two ordinary drives based on whatever minor criteria are important to you, such as color, physical size, presence (or absence) of an external power cord, etc.

I've had good luck with Seagate Barracuda drives. You can get a 1TB bare drive for $50 on Amazon, or go all the way up to 5TB: 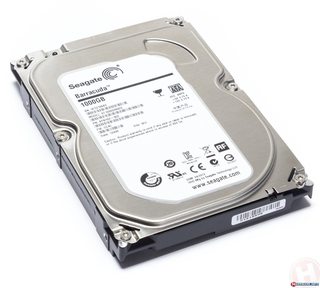 Note that there are reports that Barracuda drives could be unreliable. In that case, take whatever hard drive (or SSD) brand you like (some are better than others in general).

Now, get yourself an external drive mount. I've been using a Thermaltake BLACX N0028USU ($40, but a cheaper one should be just fine): 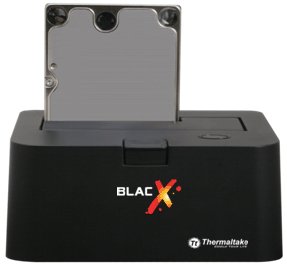 It'll take both 2.5" and 3.5" drives, and it's really nice on its own to have around - you can take a hard drive out of a dead computer and use it to get the data off the drive, for example. It's also nice and heavy and doesn't float around your desk.

With this combination in mind, your requirements:

Very reliable (obviously, it's a backup); close to 0% failure rate.

Should last for at least 5 years.

Not too expensive. Cheaper is better, and the absolute maximum for me is probably somewhere in the ~$100 range.

You're in that range, and now you have the initial investment in the mount out of the way - hard drives to put in it are only going to get cheaper.

1TB of storage space at minimum. (Of course, more can't hurt, but this doesn't matter as much as the other factors above.)

Should be usable with my laptop (so ideally, over USB).

That BlacX one has a USB connection on it, can't speak for others (although USB is fairly universal)

The main ding against this setup is that it isn't terribly portable, although I've taken it on vacations before wrapped in clothes (the hard drives come with an ESD-resistant case, use it!) with no ill effects.

For super portable backups, I always recommend a Western Digital Passport. They come in a few different capacities and colors and you can choose an optional "grip" to make it quieter when it's laying on a hard surface. 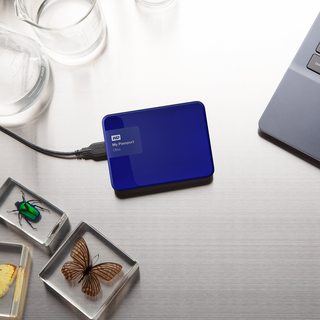 The one little setback with these is they are entirely USB-powered, which is great, but that means transfers won't be as fast as an external HDD with its own power source.

Still though, the Passport is very, very small and light. A fantastic buy for large backups with portability in mind.

There are plenty of good answers already. Let me sum up and add my experience:

You didn't mention if you need to backup Windows or Linux, or both, so it's hard to suggest a backup solution. Personally, I've been using http://rsnapshot.org/ for like 6 years which is ultra fast, the backups are ultra accessible (like you are used from your file system).

Another solution might be unison https://www.cis.upenn.edu/~bcpierce/unison/ which I use to sync remote servers. It might be overkill for the unidirectional way of a backup.

And last but not least: Keep your backups geographically distributed! You probably didn't mean "catastrophe" like in the movies, but in case you did, you do not want to have all of your backups in one city/country/continent.

DVDs come in various varieties*, for example DVD-R (RW) 4.7GB (4.4GiB). Using these for important data (backed up very week/month) alongside atleast 2 separate Hard Disks (possibly with at least storage medium one off site in case of disaster) can be effective method of ensuring your data is safe. 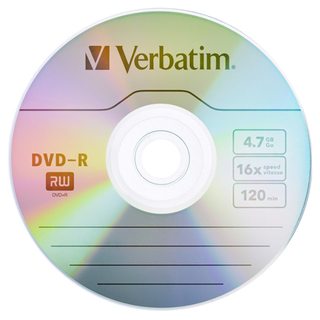 DVDs can be bought as 'spindles' (which in packs of 100 4.7GB discs can be bought for around $20 USD), which can also act as form of rudimentary storage. DVD Wallets are also available if you want storage with possibly more protection: 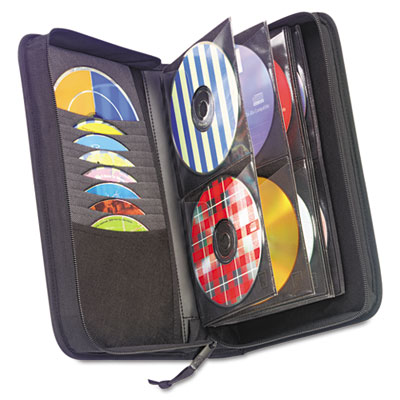 Optical discs are much less susceptible to electrical damage, as data is written as physical dents in the structure (it is a form of non-volatile storage) - complex components needed to read the data are not attached to the disc, reducing (integrated) points of failure and in some way making them waterproof.

But they are usually thin and fragile so are easy to break or scratch (and otherwise corrupt the data). Also if kept in poor conditions, the glue holding them together could break down and make them easy to split, or the layers containing the data could be damaged (by oxidation etc). However many DVDs do come with a lifetime warranty, and (more expensive) archive quality discs are available.

Formatting shouldn't be as much of a problem (heavily depending on format - see below*) as along as your DVD and ODD both can use the same standards they should work. HDDs and SSDs (and USB drives, SD cards, etc) require a partition table and filesystem formatting, and support for different formats for varies across systems (e.g. Windows only really supports NTFS and FAT (and exFAT), and possibly BTRFS - it needs more drivers to access other filesystems).

*DVD Formats - They are A LOT of optical disc standards, and you need to bear in mind which format you are getting if you want to maintain compatibility (A DVD Multi with Read Write, Blu-ray, CD functionality may be able to read all of these):

Supported by Panasonic, Toshiba, Apple Computer, Hitachi, NEC, Pioneer, Samsung and Sharp, also supported by the DVD Forum. Should be supported by most DVD-ROM equipment.:

Supported by Philips, Sony, Hewlett-Packard, Dell, Ricoh, Yamaha and others. In my experience, some systems may not support them out of the box.

Many of the above formats are also available with more than one layer (e.g. DL (Dual Layer), which are similar but can record more data. However, they are only supported by capable equipment (e.g. DL need Dual Layer support).

These standards vary because of manufacturers implementing there own standards, or by the use of different technologies. Other optical formats can be compared here

You must consider the following possible scenarios that would lead to data-loss:

Consider this setup: 2x 1TB hard drives of different types and manufacturers, RAID / copy on both the same information.

Paper is different. Do you remember the punched cards? EBCDIC and all this stuff. For years, cards were the main storage medium for the source code. I agree that 100K+ programs were... unhandly, but hey, only real programmers dared to write applications of this size. And used cards were good as notepads, too. Punched tapes were also common. And even the most weird codings, like CDC or EBCDIC, were readable by humans (I mean, by real programmers). http://ollydbg.de/Paperbak/

Not the answer you're looking for? Browse other questions tagged data-storage backup or ask your own question.