To go into some more detail, I am trying to use an electronic drum set as a drum controller for Rock Band 4 on Xbox One. I have the e-kit I am going to use from this question. This kit has both USB and MIDI out so I should have some flexibility in connecting to some kind of adapter.

Is there an adapter or accessory I can use to connect my e-kit to my Xbox One?

This is stating how there is no official support for ION Rocker drums and the MIDI Pro Adapter.

I asked two questions about the ION Rocker drums and the MIDI Pro Adapter and Chester’s response to the first was the expected “not at launch” we’ve been hearing, but when I pointed out that the MIDI adapter works on the PS4, he said “The tech just happens to work. That’s great! Fortunately, the PS4 can detect and work with wired USB peripherals.”

As for other things that you’ve probably heard a million times with varying levels of calmness, what about electric drums and ION Rockers? Official word so far has been “not at launch,” but is there any news? Any chance Mad Catz has anything in the works in this area?

Chester: No changes here in what we’ve said in the past. We need to launch the core game first and make sure that’s rock solid before thinking about these other things.

From what I’ve seen on the Rock Band sub-Reddit, the Midi Pro Adapter actually works on the PS4 (a Twitch streamer apparently plugged his in and full combo’d “I Bet My Life” with it). Was this intentional or just a happy coincidence from how last-gen instruments work on the console?

Chester: The tech just happens to work. That’s great! Fortunately, the PS4 can detect and work with wired USB peripherals.

Chester: The Xbox One simply doesn’t recognize wired USB controllers or instruments. It’s due to security at the console level and how it recognizes and handles peripherals.

Here is a workaround someone posted by using a Guitar Hero: World Tour drum brain and connected an e-kit to it and matched the MIDI settings

Basically I removed a working brain off a broken GHWT drum set. Then moved the midi port to inside the casing. So now I can connect it to my Roland Kit and use the following MIDI settings to match the GHWT drums. Rockbound will recognize it as a GHWT kit so it will not support Pro-Drum mode BUT you can still set up your cymbals to trigger the correct color similar to what a lot of people did in rock band 2.

I will keep this workaround posted here until someone can implement this and post their answer along with their findings.

What I am looking for is either some kind of custom made (or official) adapter that can pass the e-kit to the Xbox One directly or a method of using an older RB or GH drum set as a pass-through device (with detailed instructions).

The only requirement on top of basic Rock Band drumming functionality is to be compatible with "Pro-Cymbal Mode".

This is from the company that made Rock Band 4.

We know there are a bunch of other things that are important that we are actively working on (Xbox One support for ION drums, for example). Stay tuned for more info, when we have details, trust that we’ll share them.

This next quote is showing what is their highest priority as of December 15, 2015. I am speculating the support for ION drums won't be available till after January.

We hear everyone clamoring for the export entitlements of previous Rock Band games, so we’re bumping their priority to the top of the list. We’re shooting to have these up in the store for the folks who’ve exported their prior games in January. We’re starting with the original Rock Band and then following up with Rock Band 2 and Lego Rock Band.

From Harmonix regarding to their dev plans for Rock Band 4. For the case of this question, look at the plans in the Fall with these two links and the picture below. 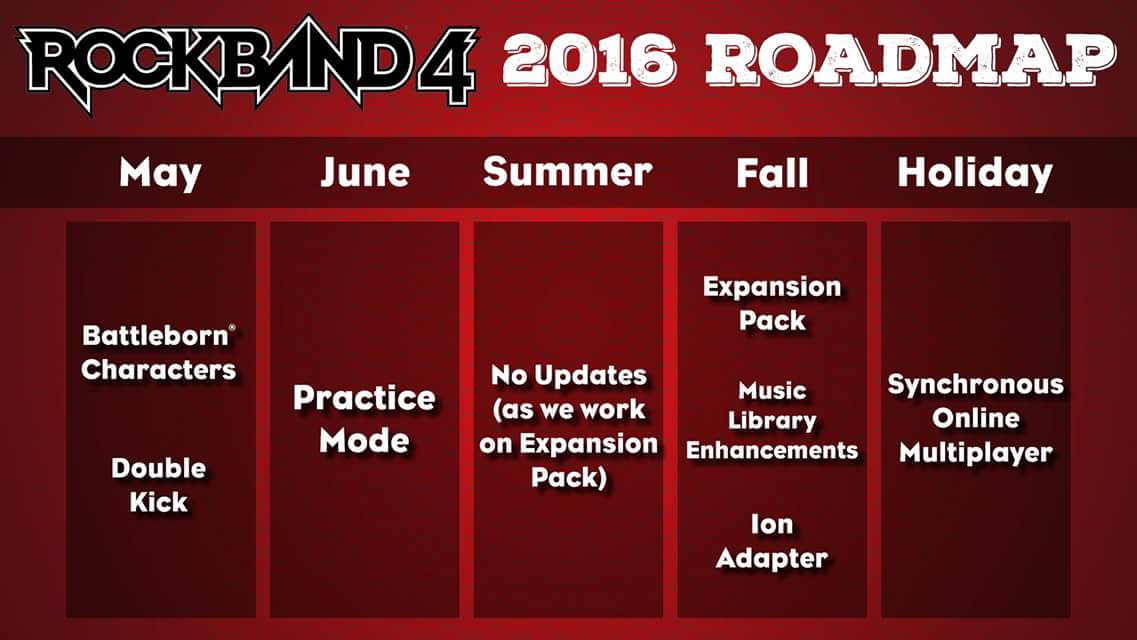 Browse other questions tagged gaming music midi or ask your own question.

9
1TB or more HDD for Playstation 4
5
Cheap yet good quality headphones
6
Electronic drum kit compatible with Rock Band 4 on Xbox One
5
AMD gaming motherboard upgrade
2
I need a really good computer that I can get built for Blender 3D rendering and gaming
2
Best upgrade to make for a gaming rig?
1
Is there a music player that can play a 150,000 song library?
1
Looking for solution for gaming via remote desktop