When I look at my laptop's screen I feel that my backbone is not straight. And, sometimes I feel neck pain. If I move down my chair (or put the laptop higher) then I have sore arms and shoulders. None of the following images make sense to me. Nobody puts the screen that much high, nor they move their eyes down to look at something on the screen. At the position that is claimed to be correct, you need to move your eyes till the end to see the windows bar.

I would feel much comfortable if I had a chance to move the screen up just the half of the height of the screen in the picture below. So to say, there should be some distance between the keyboard and the screen. 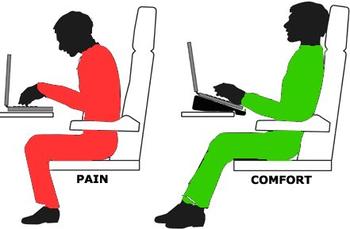 Besides being light-weight, laptops should have sliding hinges that allow users to move the screen up or down. I know that it would change the center of the gravity, but this problem can be solved with a simple trick by the designers. Maybe, there are some companies that are doing it already. I would really like to know the name of these companies.

Besides, with the developing technology (or it feels like that) a small projectors can be used instead of screens on laptops. 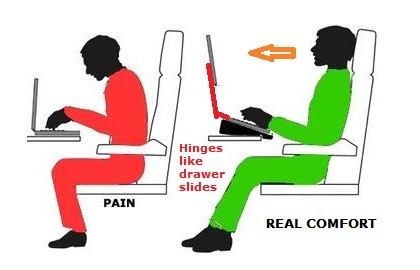 After some google search, I have found a company which do something similar to what I need. I am not sure if I can find this product in my country. And I also doubt whether their are still in business because they website and products look like out-of-date. I am going to contact with them. Question is still current.

EDIT: If the links go dead keyword for the search is 'Flybook'.

Not the answer you're looking for? Browse other questions tagged laptop monitors displays or ask your own question.

9
A good alternative for a Dell 5558
2
Are there laptops with 2xquad-core i7 processors?
3
Portable device to show powerpoint and video content that is read only and offline
0
Which of these two laptops is better?
0
Need an LCD monitor that produces same picture as laptops and Apple screens
1
Portable alternatives to conventional LED monitors for coding on two large screens after traveling by plane?
1
Are there laptops with extremely high battery capacity?
3
looking for ultralight laptop recommendation
6
32" curved 4K (UHD) monitor with IPS or better viewing angles
2
Monitor with adjustable height for home office?