What is the most affordable PSU for my requirements?

I have been reading a lot of things in the internet today about power supplies and I still cannot come to a conclusion on what exact PSU should I buy. The image below shows what I think is my power needs. 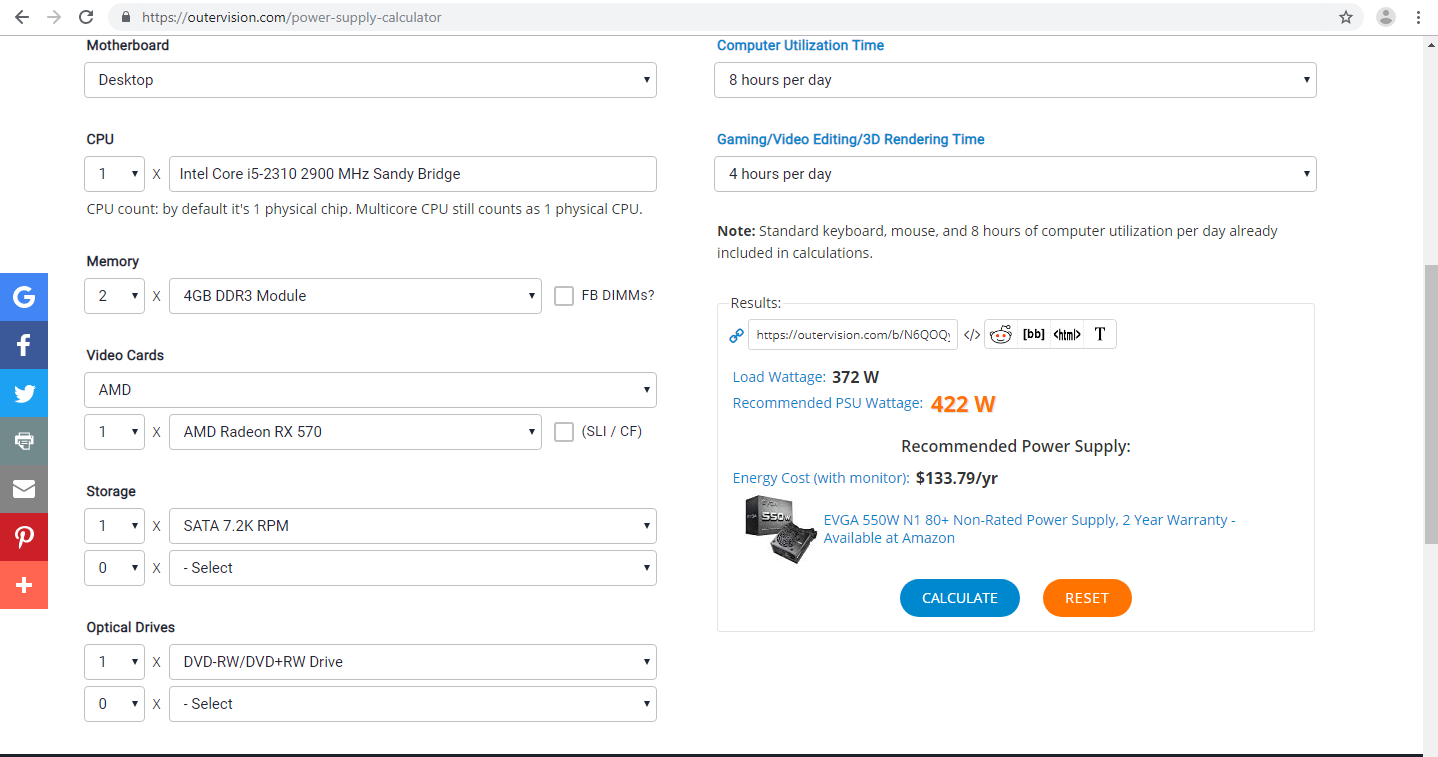 There are several power supplies that have, for instance, 500w, but the price range varies hugely where there are more expensive power supplies with lower wattage than the cheaper ones. Isn't the wattage the main thing that most people refer to when buying a PSU for their PC needs? Why do I need to consider 80 bronze vs 80 gold? Full modular vs not?

What is the cheapest possible PSU I can get without the risk of destroying my RX 570 GPU or any other components in my computer? I do not want any super high quality power supply that is expensive or anything that will end up destroying my components. Can I use an old (10 years old), generic, working PSU (my current one) that is like $10-$15 cheap that has 600w, but combine it with a surge protector and not risk my components from being fried? I only had a built in GPU in my motherboard until now where I plan to buy the RX 570. So I never had large power needs.

Sweet spot for PSU efficiency generally is operating them between 40% and 60% of their rated capability. You can look this up, see corsair for example.

the higher efficiency PSU's cost more money, the depressing feeling resulting spending the extra money on one is supposed to be offset knowing that when you leave your computer on it's wasting less power.

What is the cheapest possible PSU I can get without the risk of destroying my RX 570 GPU or any other components in my computer?

Can I use an old (10 years old), generic, working PSU (my current one) that is like $10-$15 cheap that has 600w, but combine it with a surge protector and not risk my components from being fried?

a surge protector that the PSU plugs into (then surge protector plugs into wall) will not prevent a PSU going bad internally and possibly breaking your computer. Your existing 10 year old 600w psu would likely be fine. you do not require a new PSU especially if it's in an existing pc and your just adding an RX570. You can buy a new psu which can go bad, don't fret it. If you're existing 600w psu has been working up till now there's no reason to think it won't continue to work. Post the make/model of your existing 600w psu.

A full modular psu is nice because you won't have a rats nest of psu cables in your tower, if you care about such a thing. It can make working inside a tower, especially a small one, much easier. More of a visual appeal thing. There is nothing more reliable about a modular cable psu vs non-modular one.

There's a rash of counterfeit cpu's and graphics cards having old chip's firmware rewritten to be resold as a newer model. Careful who you buy from if using amazon or ebay, which I would not. Stick with a known retailer/reseller.

Okay, so firstly, the difference between expensive and cheap PSU's that give out the same wattage can be a few things. There can be a difference on the 12v rail, it can be about the bronze/silver/gold/platinum rating. Basically the different ratings show different levels of reliability towards being able to constantly supply 500w for instance. I'd say there are a few PSU brands that I would stay away from, e.g Raidmax, but Superflower and Corsair are mostly good, safe choices.

Honestly, I would advise you to never cheap out on a power supply. I have seen way too many computer's die because of someone wanting to save a buck. I'd buy at least a silver rated PSU. And age also does have an effect. 10 years old? I'd stay away from that. Rather buy a 450w/550w PSU. The EVGA one in the image you supplied is perfect. If you want a cheaper option, go for the Superflower equivalent. Modularity, this is more focused on customisability. To give an example, a fully modular PSU you only have to use the cables that you need, i.e. no need for a second 6-pin cable to dangle next to the GPU.

7
What's the most efficient PSU for a mid-low power computer?
6
How far above my power draw should a PSU be?
0
What PSU Should I Get For A Mini-ITX Board
3
Workstation for Deep Learning in Pakistan
2
Which PSU for an ASRock Z170 EXTREME 7+ motherboard with many hard drives?
0
Minimum PSU for 5600G (no dedicated GPU) without compromising the performance?
0
Is 750 watts enough for a Ryzen 7 5800X and a MSI RTX 3080 gaming Trio Z