Inexpensive camcorder with mic input, HDMI output, and will not sleep

(edited by request) Is there a camcorder out there something like this?

Goal: I want to combine audio from a sound system and video from a mounted camera (most likely a cheap camcorder) and send it via HDMI to a TV in a separate room. This is for a small church that has several moms with toddlers, to allow them to go to the next room and still see/hear the worship service. I previously considered wireless options (you can see my first post about that, which was too broad for this forum - sorry!), but none of them worked out, so I'm planning to run a cable out an exhaust van vent, along the outside wall for about 4 meters, and back in a vent in the other room. See this horribly rough drawing - blue is HDMI and green is audio: 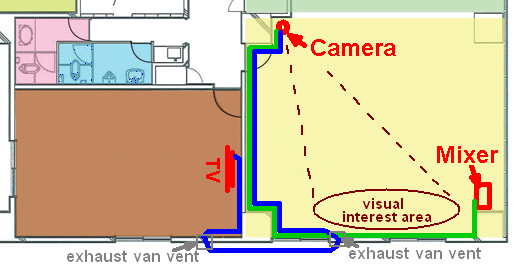 Not only is a mic input seemingly rare in low-end camcorders, many websites don't even mention it in their specs one way or the other, making it hard to search. They also don't list details like auto-timeout. I don't care about most of the specs everyone else cares about, like battery life (it will be plugged in all the time), resolution (anything >= 720p is fine), image stabilization, recording media, or compression/bitrates. I don't need to record - I just need a decent video image, combined with my audio, and sent out the HDMI output.

UPDATE: I have discovered that I might have alternatives for the mic input requirement. First, I learned that the TV can accept a separate audio input for one of its HDMI inputs, so I could run a long XLR cable along with the HDMI, like this: 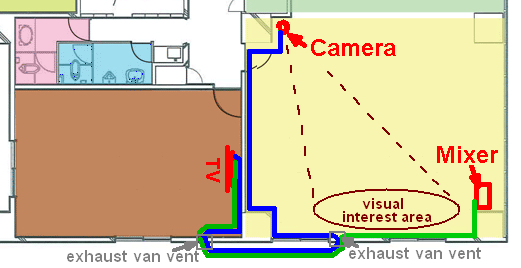 Secondly, perhaps a box like this would merge the audio into the HDMI feed before the point where the HDMI cable goes outside, and additionally give the HDMI a voltage boost it would probably need to go the distance. So here's a second scenario for camera specs that would be better for our budget:

Browse other questions tagged video video-camera or ask your own question.