Looking for a recommendation from users who personally tested some laser rangefinders (laser-tape). (So do not want recommendations based on the device specifications - (marketing blabla))

The low distance accuracy is the crucial point, because all tests what I saw says, that the laser rangefinder is accurate only at distances above 2 meters or like. At lower distances usually the measuring error is even 5 - 10 mm or more. So, let say if I want measure the inner width of my doorway (78.4cm) want get accurate result (max.) +- 2mm.

Would be nice to also have

but the low-range accuracy is the really needed feature.

I have a Bosch DLR165, which appears to have been produced around 2010. It's possible that I purchased mine that far back, or from eBay in later years. I found only one in today's eBay listing, but based on my experience with this one, I'd purchase a newer Bosch product with confidence.

The manual lists the maximum range at 50 meters, within your requirements. The manual also states a minimum of 50 millimeters. This I checked moments ago. I cannot attest to the precision/accuracy, but can confirm that when placed on a metric ruler, it reads 50 mm. I used an uncalibrated eyeball to place the tool and the opposite surface, but suggest that it would be within the specified 1.5 mm capability.

When moved one mm closer, an error message appeared.

For a different type of test, I measured the span of my door frame. The top and bottom measured 2 mm narrower than the center of the vertical section of the door. When I placed the aforementioned ruler under the tool (1.9 mm thick), the measurement was reduced by 2 mm, indicating that my door frame is warped and that the tool recognized the distance change. Repeated measurements resulted in consistent results.

This specific unit meets the "nice to have" list as well. As noted in the manual, there is a trigonometric mode that requires one to measure the two legs of a right triangle and the device will calculate the hypotenuse. I have not tested this feature, but have confidence that it will work as described.

I have used the continuous measuring mode as well. It is unremarkable in operation and works fine.

Bosch has a reputation (in my alleged mind) of creating quality products. It's certainly possible that this device and others from the same company would be made in China, but in such cases, oversight results in expected quality. A not-necessarily-marketing blah-blah review can be found at The Gadgeteer from which the image below has been presented. 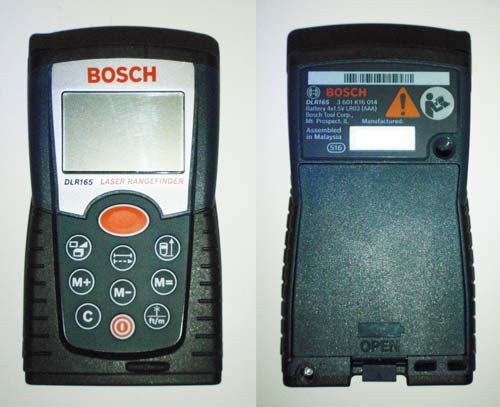 The photo shows "Assembled in Malaysia" invalidating my China reference, but that was 8 years ago.

Not the answer you're looking for? Browse other questions tagged home-electronics laser signal-processing calculators or ask your own question.